Share All sharing options for: FACT: The Dynamo Take Every Match Seriously

There was a moment during Dominic Kinnear's post-match press conference that I think deserves some discussion. A question was posed that basically asked since some fans didn't feel the team took the U.S. Open Cup seriously, would the Dynamo be taking SuperLiga seriously. Kinnear was not amused by the insinuation that his players didn't take the Open Cup game against Chivas USA seriously and issued a scathing response. 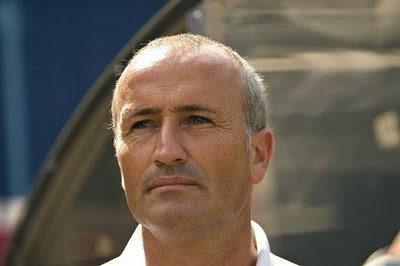 Photo by ISIphotos.com
"Tell that to the guys that I'm playing if we didn't take it seriously." Kinnear said, "I find that thought from fans or whatever offensive. I will say one thing, fans always complain that about why we don't play the young guys, we're playing the young guys and the fans don't show up so what's the problem there?"
Kinnear's reponse was appropriate and I for one agreed 100% with his defense of his team and his comments concerning fans not showing up for non-league matches. There certainly hasn't been any critcism of Kinnear for what he said and nor should there be. He has every right to call out the fans for the abysmal attendance at the two Open Cup matches, especially if some are going to question his team's effort.
Fans will always complain about their team and question the decisions made my their team because it's what fans do. Professional coaches and athletes do an excellent job of understanding this and for the most part ignoring it, but when confronted by a question that questions a team's desire to win, a foreful reaction is going to come out. If anything, I think Kinner held back a little and even if he'd jumped over the table and strangled the guy who asked the question, I doubt I would have blamed him.
On June 29th, the Dynamo played Miami FC in a Open Cup match. The official attendance? 832. The next week (July 7th) they played their next Open Cup match against Chivas USA, official attendance? 1,074. Yes both matches were on a Tuesday night, but you can easily understand the frustration when fans, in general, don't show up for non-league matches and then subsequently complain that the team isn't playing to win or that they never play their young players. Francisco Navas Cobo, Sammy Appiah and Tally Hall played in both Open Cup matches, if a fan wanted to see three of the Dynamo's potential future stars, they could have seem them twice in a week.
On the issue of the team playing to win and taking every game seriously, I'll say this. Just because these non-leauge matches are where you will see young players and often see the coaches experimenting with different formations doesn't mean the team is not trying to win or play their best. With limited roster space, MLS coaches are forced to balance their players fitness and workload often during heavy schedule congestion. Basically, don't assume a different line-up is a sign on a team not taking a match seriously or not trying to win.
The final lesson from all this is much simpler and straightforward, upset Dominic Kinnear at your own risk.