Should We Criticize a Draw?

Share All sharing options for: Should We Criticize a Draw?

Now that we've all had a chance to sleep on the Dynamo's nil-nil draw with the Columbus Crew, it's time to look back and consider just what we say last night at Robertson Stadium.
The first reaction has to be "well done defense" for holding the Crew scoreless and playing a solid match. We've all gotten a little to used to the defense giving up goal that leave everyone shaking their head, so to see the adjustments that the coaches had been preaching in practive carried out on the field was a step in the right direction. 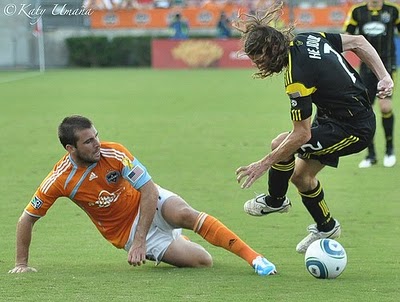 Photo: Katy Umaña
On the other hand, Columbus was clearly playing for a draw and putting little effort in to generating any attack in the hot and humid Houston evening. Logic says that when you are playing at home and your opponent is playing for a draw, you need to press the issue and try to get the full three points. I'm certainly not saying that the Dynamo didn't attack, but leaving a third sub unused with a speedy forward like Dominic Oduro on the bench can open the door to questions.
However, before we start calling out Dominic Kinnear, let us not forget the fact that Houston has three SuperLiga matches in a seven day stretch beginning Thursday. Part of Kinnear's job is to manage his roster and while his first priority is winning, playing a lot of games over a short time in the heat of a Texas summer will drain even the best conditioned athlete.
However you feel about last night's result, the Dynamo got a point against a very good opponent and gained some confidence in their defensive scheme moving forward. You can criticize the draw all you want but in my mind, there was plenty to be positive about.