My Cat and I Predict the 2010 MLS Cup Playoffs (Updated)

Share All sharing options for: My Cat and I Predict the 2010 MLS Cup Playoffs (Updated)

In honor of Paul the Octopus who died at the age of 2 today, I shall endeavor to accurately predict the results of the 2010 MLS Cup Playoffs which begin Thursday. Of course, just making my predictions alone isn't enough to honor the great psychic octopus. So in order to do this properly, I've recruited my cat Mr. Wilco, who has dabbled in soccer prediction in the past, to make his picks as well.

How does a cat predict the results of soccer matches you ask? Well, it's actually fairly simple. I show the logo of each team to Mr. Wilco and tell him the name of the team. Whichever of the two teams elicits a larger reaction from Mr. Wilco is his predicted winner. Like I said, simple. 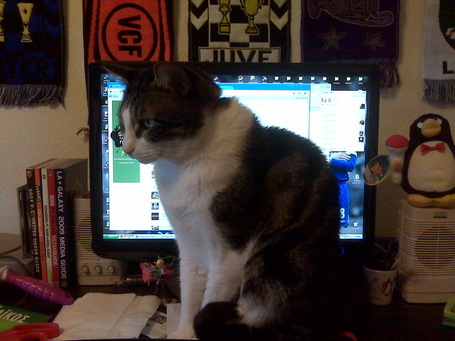 Mr. Wilco is a highly trained soccer prognosticator. Do not try this at home.