Another week is coming to a close and you know what that means right? You got it! It's time for the Anti-Power Rankings. I know everyone spends their entire week eagerly anticipating the release of not only these brilliant rankings of the good, the bad and the ugly from the soccer world, but you also look forward to my modified song lyrics that intro the rankings each week.

So I won't keep you waiting any longer...on with the Anti-Power Rankings!

#5 - Meltdowns on BigSoccer: Wow I think some fans should maybe they should switch to decaf?

#4 - Doug Quinn: I honestly can't decide whether the President of FC Dallas begging the local Dallas media to talk about his team is brilliant or pathetic. At least he's trying I guess, but he's fighting an uphill battle against years of apathy, disinterest and damage done by the Hunt Sports Group in chasing off the Hispanic fan base, treating season ticket holders like gullable morons and a town that just doesn't embrace professional soccer. No matter I think @jrodius said it best..."you know yer small time when your CEO has to write a letter of introduction to it's own media after existing for 14 years"

#3 - Simon Borg: Another week, another big of shoddy "journalism" from the resident hack of MajorLeagueSoccerSoccer.com. This time, Borg goes out and claims that FC Dallas' Mavin Chavez guaranteed a victory over the Los Angeles Galaxy in a Honduran paper. As usual, Borg twisted the headline to fit his needs and never bothered to actually get a translation of what Chavez said. He never guaranteed anything, he simply said "I think we win 2-0 or 2-1"...now, I don't know what Borg's definition of a guarantee is, but if he considers that one, remind me never to enter in to any type of business deal with the guy.

#2 - Angel City Brigade: Impressive. Most impressive. The force is strong with them. 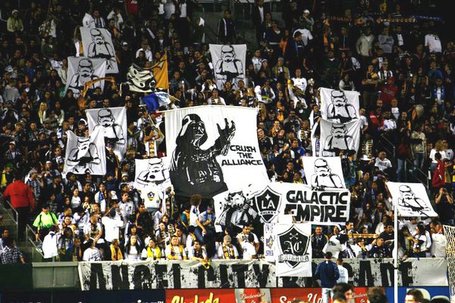 #1 - A Couple of Idiots: I completely understand the frustration and disappointing Canadian soccer fans are feeling after Teal Bunbury decided to play for the USMNT over the Canadian National Team. It sucks when a talented young player chooses to represent a different country than yours, but it happens. Most people are dealing with it maturly, like one tweet that said, "disappointed.. fond memories of watching you father play for the red and white". Sadly, were a few "fans" of Twitter who have decided to go multiple steps too far

Really? It's just football and there is a clear and easy to see line between passionate support and being an a**hole. You might not like Bunbury's decision, but it was his to make and making threats of harassment or wishing violence on the guy is just stupid.