Monday Morning Centre Back: If The Season Started Today

Share All sharing options for: Monday Morning Centre Back: If The Season Started Today

Let's say the 2011 MLS Season was kicking off today, what would Dominic Kinnear's starting XI look like?

For the purposes of this post, ignore injuries and any other possible factors that might prevent a player from being available for selection. With that in mind, I spent some time this weekend considering the current roster and what combination of players made the most sense to me as the first choice starters. 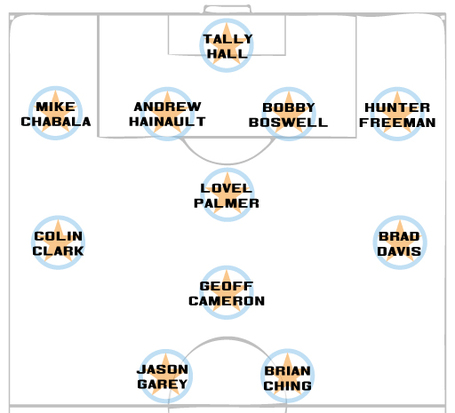 Most of the positional decisions seem pretty straightforward, with Brian Ching, Geoff Cameron, Brad Davis and Bobby Boswell obvious starters. There is no reason to believe that Mike Chabala won't start the year at left back, with Hunter Freeman at right back, thus allowing Andrew Hainault to move inside.

The debate will probably come at who partners with Ching up front and who plays on the left wing. I think Colin Clark, if healthy, makes the most sense but a strong argument could of course be made for Danny Cruz or Corey Ashe. At the very least, the Dynamo have depth at the outside midfield position and options are never a bad thing.

Ashe and Cruz provide speed to challenge the opposing defense, while Clark looks to be a player more in the style of Brian Mullan.

Obviously, things can still change depending on any additional signing the team makes, but I'm curious what Dynamo fans think about my projected starting XI and if they would make changes.

Here is video from the Dynamo Press Conference on Friday officially introudcing the new signings and the players who have signed new contracts so far this off-season.