Pat Onstad is Now a Little Prettier (His Words, Not Mine)

Share All sharing options for: Pat Onstad is Now a Little Prettier (His Words, Not Mine)

We won! We won! It's feels damn good to say that for the first time after a Dynamo MLS match since May. It certainly was a bit harder than it should have been, but at this point who cares. It's three much needed points in the standings.

Of course, in a match on a hot night with a lot of goals scored, tempers are bound to flare at least once.

The photo above shows clearly the controversial moment of the night that came late in the match after Freddie Ljungberg broke free on goal. Pat Onstad sprinted off his line and covered the ball but Ljungberg dragged his foot behind and kicked Onstad above the right eye, leaving a large obvious bruise on the keeper's head.

Ljungberg received a yellow card but it easily could have been a red. While he didn't swing through with a kick, he clearly left his foot behind the play and from my point of view he had time to get completely clear of Onstad. Fortunately the injury wasn't serious and both Onstand and Boswell who immediately confronted Ljungberg discussed the incident afterwards. 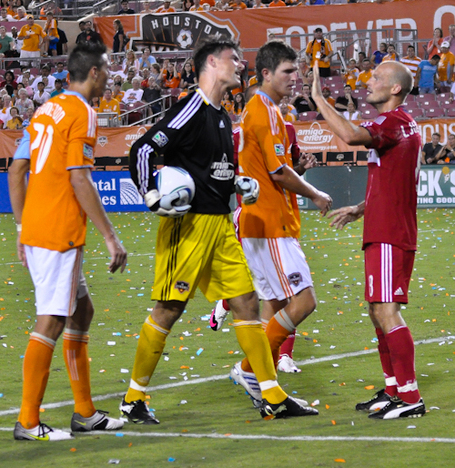 "He left the boot it, we talked about it after." Onstad said. "I don't think he swung through he just left it there. The guys at the end did a pretty good job marking him pretty tight and I think he was getting frustrated and kinda took it out, but there was no way he was gonna injure me from that standpoint. Makes me look a little prettier anyhow."

Boswell focused more of the referee's decision to only award Ljungberg a yellow card. 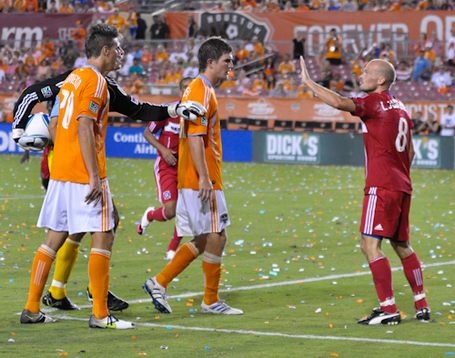 "I don't like to talk about what the ref should and shouldn't have done, I think it's one of the situations that we're glad  Pat didn't get hurt," the Dynamo defender said. "If you look at his head you can see his got a big thing on it. If he gets a concussion there or gets a cut, he's probably going to miss a couple games so I think they gotta take that into consideration when they are throwing the cards around"

I was only able to  visit the Dynamo locker room post-match, but I was able to see video of Ljungberg's post-match interview and he was neither asked about or commented on the event.

While I certainly don't think Ljungberg's move was necessarily malicious, it was certainly classless and a dumb decision by a guy who was clearly frustrated. Everyone handles those type of situations differently but for an experienced player like Freddie to drag his foot and make contact with a player in a defenseless position like that is a bit disappointing. As I stated before, I feel he had time to avoid the contact.

Hopefully the play will be reviewed by the Disciplinary Committee as no matter what the intent was, it was clearly a dangerous play and one that should at least receive a second look from MLS officials.