If you've never heard of the Free Beer Movement, the headline on this post might not immediately make sense, don't worry though, the follow paragraph will explain everything.

Here is the goal of the FMB, in their own words from their website (which I encourage you to visit):

We are a grassroots movement of American soccer fans (Like you! That's why you're here.) sharing our passion for the game with, and to educate, not-yet-converted, but willing, friends, family, and colleagues in exchange for a beer here and there. It's a modest idea to create new and future fans of the game through the power of free beer.
Beer is the medium. Soccer is the message.
Help us "Build American Soccer One Beer at a Time".

With that in mind, I come to the point of my post.

Last Saturday at the Texian Army tailgate in Houston before the Dynamo v Fire match, two new University of Houston students approached us and enquired as to what was going on. We happily explained we were tailgating for a soccer match, which immediately got their attention. The two students, Kaspar and Jonas, had just arrived the day before from Denmark and where both fans of the beautiful game. 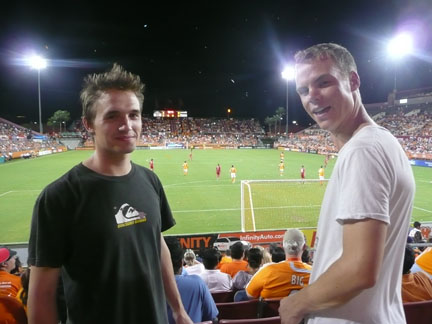 They had no idea that their was a game that day or that the US had a domestic league, but they were quick to decide to attend the night's match, with a little encouragement from all of us. They disappeared for a few minutes while our group found two tickets for them to stand with TA. When they returned, they had bought beer...and not good beer (Busch Light) though and we of course couldn't let that stand. We gladly shared some quality beverages (Shiner Bock and St. Arnold's) with them and they marched in to the stadium with the TA before the game. 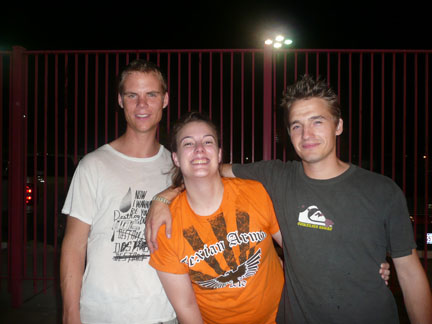 I myself was running a GameThread during the match, but I visited the TA at halftime and found Kaspar and Jonas holding up an Eddie Robinson banner and jumping all over the place. It was great to introduce them to the Dynamo and MLS and hopefully they will be able to enjoy more matches during their stay in Houston.

Thanks to Christine Wise for the photos