Quick post this morning to give everyone a glimpse at the architecture firm Populous who will be designing the Dynamo's new stadium. Populous is a heavy hitter in the stadium design industry, having been a part of numerous high profile projects across the world, along with all three of Houston's new stadiums built over the past few years.

Based on the firms list of stadium projects alone, I think Dynamo fans can feel comfortable about getting a functional and aesthetically pleasing home for the team. All we can do is start to get excited for the day some final drawings are released and we can get an idea of just what the new stadium will look like. Until then, we can enjoy the often seen preliminary design (the image below does not represent the final stadium design). 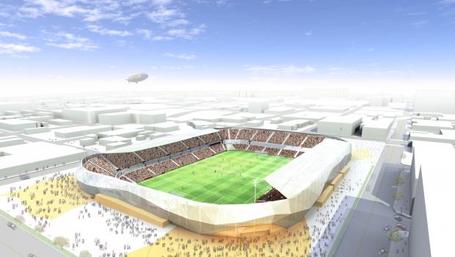 Here are some highlights from the press release that came out today:

"We set out to design the perfect urban soccer stadium: tight, atmospheric, and intimate," said Christopher Lee, Populous senior principal. "It's a beautiful stadium for the beautiful game."

In recognition of the industrial heritage of its new neighborhood, the new stadium's distinctive skin evokes an industrial gem of individually composed, expanded metal facets. Punctuating this bold architectural form, the new stadium is highlighted in orange polycarbonate at three-story-high entries and throughout new spectator areas. With its simple materials, yet bold design, the new stadium will be a unique home for one of America's premier soccer franchises.

"We're extremely pleased to have Populous as our lead architect for this project," Dynamo Chief Operating Officer Chris Canetti said. "We believe we have the best location for a soccer stadium in the United States, and Populous will help make our new stadium a truly unique home for Dynamo fans and help us create an atmosphere comparable to any in the world."

This is the fourth sports project Populous will have designed for Houston; the firm also designed Minute Maid Park, Toyota Center, and Reliant Stadium. The firm has designed more than 70 professional soccer stadia around the world, including the recent main stadium for the 2010 FIFA World Cup, Soccer City Stadium in Johannesburg, and the upcoming stadium in Natal for the 2014 World Cup in Brazil. Populous' Major League Soccer portfolio also includes new stadiums for the Colorado Rapids and the Kansas City Wizards.

Since inception in 1983, Populous has grown into the world's leading design firm dedicated exclusively to creating environments that draw people and communities together for unforgettable experiences. The firm has completed more than 1,000 projects around the globe with construction value exceeding $20 billion. Populous has worked with 24 Major League Baseball franchises, 30 NFL franchises, 80 professional and civic arena clients, 40 global soccer and rugby teams, 120 universities, 40 convention center clients, 29 equestrian clients and has planned more than 30 major worldwide events.

Our portfolio includes such icons as Yankee Stadium in New York; the 2012 London Summer Olympic Games main stadium; Nanjing Sports Park in China; ANZ Stadium in Australia; Phoenix Convention Center in Arizona; the new University of Minnesota football stadium and event planning for the Super Bowl and Major League Baseball All Star Game. We have received nearly 200 design awards for our work, including three national American Institute of Architect awards and countless global design awards. In addition, in 2009 and in 2010, Populous was named one of Fast Company magazine's most innovative companies in sports and was also named the American Institute of Architects - Kansas City Chapter Firm of the Year. As Populous, we enthusiastically embrace the expertise we uniquely claim - drawing people together around teams, athletes, events, places, commerce, industry and ideas they wholeheartedly embrace and adore.