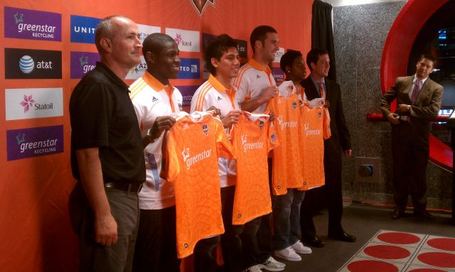 The Houston Dynamo held a press conference today to introduce four new players to the media. Houston's two MLS SuperDraft picks, Kofi Sarkodie and Will Bruin were in attendance, along with Academy signees Josue Soto and Alex Dixon.

Team president Chris Canetti and head coach Dominic Kinnear both made brief comments and answered questions from the media. They made it clear they are pleased with the new players so far but the work is not done in building the 2011 roster. Here are some of the important points:

Kinnear:
We also learned the jersey numbers for the four new signings. Sarkodie will wear #8, Bruin #12, Soto #18 and Dixon #19.