Share All sharing options for: The Anti-Power Rankings: Week 20

Money, get away
Get a good job with more pay
And your O.K.
Money, it's a gas
Grab that cash with both hands
And make a stash
Spurs bench, reserve team, four star daydream
Think I'll buy me a football team

Welcome back to another edition of the Anti-Power Rankings, your weekly review of the best, most ridiculous and worst news from the past week in the world of football. This week, I discuss US Soccer's failings, Sir Alex's diarrhea of the mouth, Pulpo Paul's new monument and more.

So follow me across the jump and enjoy this week's Anti-Power Rankings! 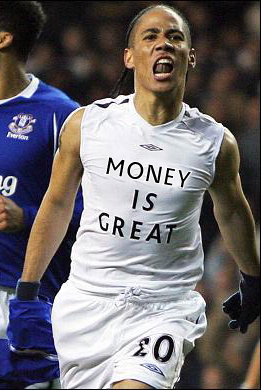 #4 - The USMNT is Playing This Weekend?: Who knew! Apparently not many based on ticket sales as once again US Soccer has shown their disinterest and lack of commitment to building interest in the national team and the game in general. As if the poor ticket sales aren't enough, the game isn't even on national English language television. It's on a Spanish language channel though. Makes perfect sense...it doesn't matter that this is not an "A" team roster, when those jerseys are being worn it's the NATIONAL TEAM and it should be easy for people to find and watch. Instead you'll have to find it on a channel that not everyone has or on ESPN3, a service that not everyone has. Well done US Soccer.

#3 - Will Sir Alex Please Shut Up: I don't care how good of manager Sir Alex Ferguson may or may not be, but clearly he thinks that the success he's had clears the way for him to comment on anything and everything in the football world. Most recently, he's discussing Eric Cantona joining the front office of the New York Cosmos. "I am delighted for Eric, it is quite an innovative move by New York Cosmos." Who gives a damn what Sir Alex thinks other than the automatons that think he's some sort of diety. Just shut up dude, I don't care what you think, you're just a football manager. If you want to comment on all the news from the game, quit and go work for Sky Sports or ITV.

#2 - The World Champions on The Simpsons: This is such a great image, but the definite highlights are the caricatures of Carlos Puyol and Andrés Iniesta. 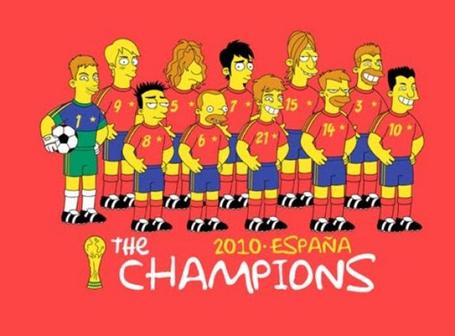 #1 - The Pulpo Paul Memorial: The great Paul the Octopus may of passed away but his memory will live forever at the Sea Life Aquarium in Germany. A memorial to the psychic cephalopod was unveiled this week that includes a golden statue in the center of the memorial that holds the mighty octopus' ashes. Paul will never be forgotten! You can see photos of the memorial here.