The Two Sides of Phillip Anschutz: An American Soccer Savior With a Disturbing Social Agenda

Share All sharing options for: The Two Sides of Phillip Anschutz: An American Soccer Savior With a Disturbing Social Agenda

Sports fans typically don't care where the money behind their favorite team comes from. It's the thinking that as long as we are winning games and championships, does it even matter who's writing the checks? Most are fine with not knowing simple because they don't care for the simple reason that its sports and one of the core purposes of sport is to distract us from reality and allow us to forget about the trials and tribulations of day to day life.

Therein lies a core struggle I have with covering and being a supporter of the Houston Dynamo. The Dynamo are owned (50%) and controlled by Anschutz Entertainment Group (AEG), the gigantic entertainment conglomerate that owns the Los Angeles Galaxy, other sports franchises across the globe, stadiums, and entertainment venues. Essentially it is one of the largest entertainment companies in the world. AEG is a wholly owned subsidiary of the Anschutz Company which is owned by the Colorado billionaire Phillip Anschutz.

I honestly wouldn't be surprised if the only reason you've ever really heard about Anschutz is because his name is on the MLS Cup trophy that is presented to the league's playoff champion each season. He has that honor because there is no question that without the efforts and substantial financial support of Anschutz, Major League Soccer would likely not be the growing and successful sports league it is today.

Anschutz's interest in soccer was fueled after attending the 1994 World Cup final and seeing the enormous potential (in terms of interest) the sport was capable of generating. Two years later he was involved with the Colorado Rapids of the fledgling Major League Soccer, a decision that was hardly considered a sound business decision. At one point Anschutz owned six franchises in the league and took severe financial loses because he believed in the sports potential and the idea that the league needed to spend to succeed.

He deserves credit and respect for that dedication and investment, in much the same way that Lamar Hunt is revered for many of the same reasons. American soccer would not be was it is today without the support and enthusiasm of Anschutz...but there is another side to the story.

Anschutz is a radical faith based political activist, a man who uses his vast fortune in attempts to advance an anti-homosexual and anti-science (specifically evolution) agenda. Anschutz has funded the Institute for American Values (IAV), a group that campaigns against same-sex marriage and against single parenting. The president of the IAV is an outspoken opponent of critic of gay marriage, claiming it would weaken the general institution of marriage, which is a common and severely flawed argument frequently utilized by the anti-gay marriage movement.

Anschutz was a driving monetary force behind the Colorado for Family Values, the organization behind Colorado's anti-gay constitutional amendment, Amendment 2, approved by the voters in 1992 and later overturned by a Colorado federal judge and eventually the US Supreme Court (Case: Romer v. Evans, 1996).

In addition Anschutz funds the Discovery Institute, a think tank based in Seattle, Washington that promotes intelligent design and criticizes evolution. According to the group's website, one of their primary missions is to:

...counter the materialistic interpretation of science by demonstrating that life and the universe are the products of intelligent design and by challenging the materialistic conception of a self-existent, self-organizing universe and the Darwinian view that life developed through a blind and purposeless process.

Anschutz is of course well within his rights to support and fund any group and/or cause he pleases, but I'm also within my rights as a fan of a business he owns to object to his involvement with the team because of his radical beliefs. The very fact that people aren't generally aware of this side of Anschutz is worrisome and while I certainly do not expect everyone to agree with my viewpoint, all the facts should be laid bare for individuals to interpret as they may.

Another fascinating element of this story is that while all of these details are public knowledge, Anschutz has managed to remain quietly in the background, limiting any connection between his social conservative activism and his multi-billion dollar sports and entertainment business.

This is of course where the potential disconnect for a sports fans occurs. Many would prefer to ignore the actions of Anschutz that do not directly relate to sports because it's easier that way. I think it's fair to say that many sports fans would prefer that politics do not mix with their sports. While that's perfectly acceptable, I can't separate the issues because I support and write about a team and a league that is in business because of Phillip Anschutz. I can't accept that the league's championship trophy is named after a man who seeks to deny the freedoms and rights of an entire community of people based solely upon their sexual preference.

You may feel that social and political issues mix with sports in much the same way that oil and water don't mix. You are entitled to follow the see no evil, hear no evil, speak no evil philosophy, but I cannot be Mizaru, Kikazaru, and Iwazaru. Every season since 2008 (when the playoff championship trophy was renamed), the MLS Cup has become a reminder of Anschutz's association with league which drives me crazy like an itch that I cannot scratch. 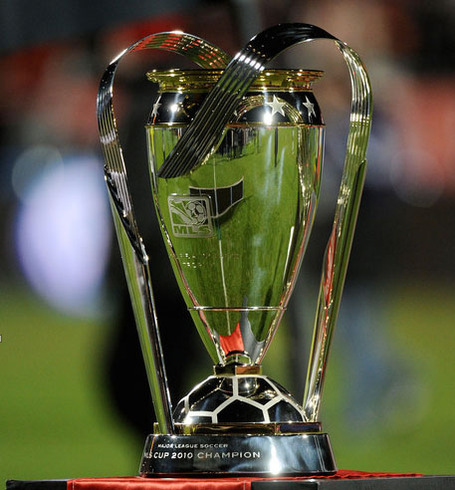 So what would I like to see happen? It's simple really, I want AEG to give up operating control of and sell all their shares of the Houston Dynamo. Ideally I like to see Anschutz completely removed from any association with MLS but I accept that is both unlikely and probably unrealistic. That said, people must at least be aware of who this man is and be able to decide for themselves how they fell about it.

I sat and watched Chivas USA hold the first ever MLS Equality Night while Chivas USA players Justin Braun and Michael Lahoud posed for photos as part of the NOH8 Campaign* this past season. I watched as on the same day, July 23rd, the Columbus Crew and Outlook Media hosted the first annual Pride Cup, a one-day adult GLBT and allied soccer tournament. I could only sit any wonder if we'll ever see the Dynamo associated with any events like that as long as Anschutz is part of the team's ownership.

Just today, former Crew player David Testo revealed on the CBC that he is gay.

"I'm gay, I'm gay. I did not choose. It's just part of who I am. And it has nothing to do with the talent of a soccer player. You can be both an excellent soccer player and being gay...

I really regret not having said publicly earlier. I fought with it all my life, my whole career. Living the life of a professional athlete and being gay is incredibly difficult. It is like wearing a secret in his bags but never yourself. It saps all your energy to you, in addition to having to perform, having to play."

You have to wonder how a gay athlete would feel about playing for a team owned by a known anti-gay individual.

I fully expect my comments and call for AEG to sell their stake in the Dynamo to be generally ignored and possibly ridiculed and I'm fine with that. I will feel better than I've used my platform to express my concerns about the team's ownership and hopefully enlightened a few people to the double edge nature of MLS' association with Phillip Anschutz.

*Ironically, former Dynamo player Mike Chabala was the first MLS player to pose for the NOH8 campaign while he was still with Houston.