A Journey into Houston vs. LA

Share All sharing options for: A Journey into Houston vs. LA 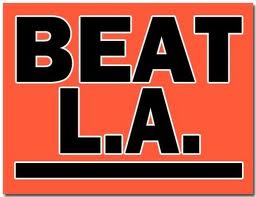 So this week, while this two-weeks-that-seems-like-two-years eternity marches inexorably on to Dynamo's date with destiny, or at least a third star, on Nov. 20, I started to reflect on exactly why I despise Los Angeles so much.

I mean, it's not like Angelenos are Dallasites (rhymes with parasites), and in truth, I do not put LA LA Land in that category. However, it is a wretched hive of scum and villainy, and about that there can be no doubt. Only in LA would anyone truly entertain the idea that Greedo shot first, and only in the more deranged portions would it be entertained by the person who invented the characters to begin with. (Click here.)

But that little geeky detour to ancient history brought to mind certain other contests of skill between representatives of our fair cities over time. And it tells a tale of great battles fought back and forth. I think when Houstonians give them Southern Californians much thought, among the first (after "Haven't they slid into the ocean yet?"), is how great it is to take down people who think so, so highly of themselves. I'm sure there are outposts here and there of non-shallow, non-image-obsessed, non-Kardashian-like residents of Los Angeles huddled in the shadows, yearning to breathe free (or in downtown LA, simply to breathe), but the impression over the years from here on the shores of the Gulf is that these guys can take their "Hey, Man!" and shove it where even their best movie cameras can't shoot.

(And yes, the irony of a Houstonian jabbing anyone else about air quality may just move this post into the meta realm, but so be it. They think Greedo shot first. Irony is lost on them.)

So let's get in the Mr. Peabody's Way Back Machine and take a look at the history of the sporting rivalry between these two cities.

The first place to stop is of course at The Game of the Century in January of 1968, one year, as they say on The Football Ramble, after the Summer of Love. The scene is the Astrodome and the contest is the University of Houston Cougars, led by the Big E himself, Elvin Hayes, playing the vaunted UCLA Bruins, led by Lew Alcindor (soon to be Kareem Abdul-Jabbar). Let's let the principals speak for themselves:

And the best part is listening to the UCLA guys, all these years later, offering excuses. Nobody was comfortable? Give me a break. Clearly someone was more comfortable than someone else.

Now of course, I would be completely unfair if I were not to point out that that game was a midseason one. It meant nothing for either team in conference play. One game later that season did have meaning, and that was in the NCAA Championship semifinals (they were not at that time called The Final Four). In the long-sought-after rematch at Los Angeles' Memorial Sports Arena, UCLA pummeled the Coogs 101-69, en route to another title.

So, one one hand, Houston invented Big Time College Basketball as we know it today, while UCLA went home with a championship. I call that a wash. All even.

UH and UCLA have played many games over the years in all sorts of sports, and I have no intention of tracking them all down, because (1), what am I, your shoe-leather detective? and (2) No other match-up even comes close to that importance. 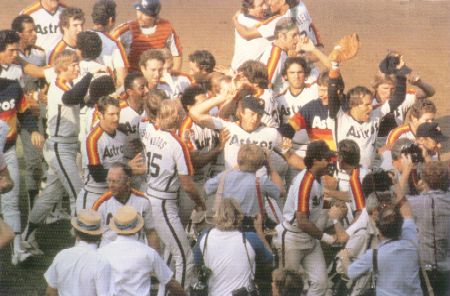 So, on to the pros and to a day that I will never forget, Oct. 6, 1980. The Houston Astros went into Los Angeles, home of the (in my house anyway) hated Dodgers for a three-game series and with a three-game lead. The Astros had never won a trophy of any kind, while the Dodgers were perennial NL West Champions with the demise of the Big Red Machine. So what happened? The Dodgers won three straight, knotting the NL West and forcing a one-game playoff for the right to take on the Phillies in the NLCS. Enter: Joe "Knucksie" Niekro. Here's a graf that sums it all up from the excellent blog Astros Daily:

With their best chance at reaching their first post-season slipping away, the Astros scored early and often to beat the Dodgers easily, 7-1. The Astros had held a three-game lead over the Dodgers with just three games to play, but lost their last three games of the season in Los Angeles, setting up a one-game showdown for the right to play the Phillies in the NL Championship Series. Starter Joe Niekro tossed a six-hitter and first baseman Art Howe drove in four runs to lead the team. The win was Niekro's 20th of the season, making him the only Astro pitcher to reach that total more than once.

So, Advantage: Houston once again. But not so fast! The very next year, in 1981, The Astros and Dodgers met in the first ever Divisional Playoff (necessitated by the midseason strike). Houston took the first two games of the best-of-five series at home and once again went to LA needing only one win in the three at Dodger Stadium to advance. Result: Dodgers take all three and go on to win the World Series. However, since the World Series was not won against the Astros, I still say, a wash.

So we're starting to see a pattern emerging here, a back and forth that is the hallmark of any true rivalry. Does that hold true upon continued examination? Mr. Peabody, put that dial back to "Basketball."

The Houston Rockets and Los Angeles Lakers have faced off in the playoffs no less than eight times. The Rockets took the first two, in 1981 and 1986, becoming the only team not named Boston or Philadelphia to beat the Showtime-era Lakers. And in neither series was the result even close, with the Rockheads besting LA 2-1 (OK, mayb a little close) in 1981 and 4-1 in 1986. And who can forget that miracle inbounds play in 1986 to crush the Lakers' dreams? You did? Well then, check this out:

I remember watching that live, and to this day, I still get chills. Now, after that, things took kind of a turn, with Houston only beating the Lakers one more time in the playoffs, in Magic's "Comeback" year of 1996. The last meeting was the best of the lot, with the Lakers beating the Yao Ming-less Rockets 4-3 in the 2009 Western semis. (Yeah, well, who didn't?) Overall, the Lakers now lead the all-time playoff matchup with a mark of 5-3 and an all-time game advantage of 20-15.

But wait! Doesn't LA have another team in the NBA? That would be the Clippers, right. The Rockets and Clippers have played each other in the playoffs only once, a 3-2 win for Houston in the first round in 1993. So overall, Houston now trails only 5-4 against Los Angeles. Since they have two teams to our one, and twice when the Rockets beat the Lakers they beat the defending champions, I'm going to have to score this one mostly even morally, but with a slight edge based on final results alone to Los Angeles.

Over to throwball, the Houston Oilers and Los Angeles Rams (Yes, children, the Rams were once in Los Angeles. What, you never saw Heaven Can Wait? Shame on you.) never once faced each other in the playoffs (different conferences) or in any meaningful game. Furthermore, when the Raiders lived in Anaheim, they also never faced the Oilers in the playoffs or in any meaningful game (What a bunch of wusses.). And during the time of the Houston Texans, that also holds true for the pure and simple fact that there has not been an NFL team in Los Angeles while the Texans have been around.

And let's just take a look at that last point. In the late 1990s, the NFL was bound and determined to get a team in Los Angeles, which had been without the NFL since the Rams and Raiders left in 1995. Think the way MLS is embarrassingly falling all over itself to get the New York Cosmos restarted and then add about a billion dollars to the picture. It was an amazing fix that was in. But no one in LA could get anywhere near organized to get a team, stadium deal or any municipal, county or financial muscle together to make it happen. The NFL basically pleaded with someone, anyone, in LA to step forward. Result: Crickets. At one point, even Tom Cruise got involved with a potential ownership group. That was when you knew things were well and truly off the rails. 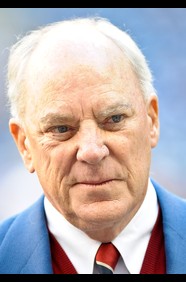 Enter Bob McNair, who came up with several bags of coin, which the NFL followed like a hypnotist's watch, leading to a 29-0 vote for the Bayou City in 1999. Result, Houston got the 32nd franchise. Now we can go around and around about whether or not having the Texans or not having the Texans is the better thing. And indeed, even the eminent philosopher Joe Bob Briggs has proferred that losing your NFL teams is a sign of civic maturity. But the point to take from all this is that LA looked like a bunch of dithering fools and Houston punked them. The NFL is the most successful sports league in the world, and LA for the last 16 years has been on the outside looking in, and the reason is because of our fair city.

So, after following this long and torturous trail through the other sports, we wind up back where we began, with nine days to go until the Houston Dynamo battle the LA Something-or-others (Beckhams? Experiments?). So, what has been the playoff history here? Easy enough, and it's not all galactic in nature.

First let us begin with the City of Angel's Bastard Goat Children, Chivas USA. The Dynamo, in their first ever playoff match, back in 2006, faced las chivitas with the result all Orange in a two-legged affair. Here's the ending in full glory:

But of course, that's not the full story is it? Like with all other aspects of the Houston-LA rivalry over the years, it's been nothing if not even. So, before we spend any more time on the Amerigoats than they deserve (which is none, really), let's go to the most recent "lights-out" tilt, and I mean that in all ways possible. (And I apologize in advance for the Harkesapocalypse you're about to endure.)

I have to say, that in the two years since that happened, I honestly believe that is the first time I have watched those highlights. Man, did we ever get robbed. What is there to say other than that? Oh right, have to finish up this incredibly long post after watching that piece of crap, completely undeserved, highway robbery...

So, where does that leave us? Well, I think it leaves us almost exactly where we started. Houston and Los Angeles have an enduring rivalry that, while it has not been punctuated with dominance or really, huge amounts of vehemence, has been overall an even affair, with plenty of magnificent highlights and lowlights for both sides. Both cities have their fair claims to inspiring moments over time, though I actually think that except for perhaps UCLA's semifinal win, there are more big Houston moments than the other.

The one thing to remember though, the one thing that perhaps we should all remember is that when going up against Los Angeles in any event, is, they are Greedo. You are Han. And well, you know what to do.