Share All sharing options for: Kansas City, here we come

Those of you who listen to the World Football Phone-In on BBC Five Live every week (either live or podcast) can hear the wonderful host Dotun Adebayo singing this classic Leiber and Stoller tune regularly, expecially on the weeks when co-host Sean "The Big Wheel" Wheelock is on.

Last night, as the seconds ticked away on the last Dynamo game ever at Robertson Stadium, this was the song going through my head because the Orange are indeed heading to KC town wih the express goal to elave it in flames and ruin, burning, as the old Astros song used to go, in "Orange Fire." 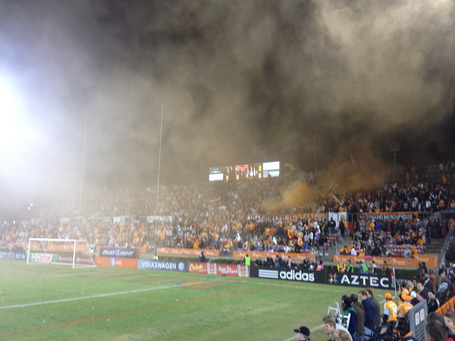 Of course, I also had other thoughts after that game, such as, in no particular order:

There is almost no way for me to express my joy at heaping pain on Piotr Nowak. I hold him personally responsible for the tactical mish-mash that he employed in the 2008 Olympics that led to the US missing out on the medal round. As Michael-D and Playtherapy, who were there last night can attest, as soon as Ching's goal went in the first (coherent) words out of my mouth were "A dagger right into the heart of Piotr Nowak." (With certain expletives and enhancements deleted.)

Apparently, I have even passed this on to my son, who was sitting with friends behind the Phunion bench. Later in the game, as the orange smoke was filling the stadium, He leaned over the rail and shouted: "Smell that smoke Novak? That's your team going down in flames."

My proudest moment as a father.

Much has been written about how appropriate it was to end the run at Robertson with (1) a win, (2) as it began, with a Brian Ching goal and (3) in a meaningful game. But there is something else to add. My first ever Dynamo game, the one that cemented this team in my heart and soul forever, was a 1-0 win over (That)D(amned)C United in September 2006. It's a well-played clip, but two things I frequently notice are one Mr. Sir Robert Boswell getting beat on the play and a certain gum-chewing coach taking his medicine. Remember that? No? Well then:

Oh, and it was on a Brad Davis service by way of Paul Dalglish's polished dome.

That my friends, is history at its finest.

Another thing I noticed was that attendance at the last two Dynamo games at Robertson Stadium were well beyond capacity of the new Dynamo Park. So unless they expand that building (apparently, it's being built with that in mind) or move to Reliant Stadium, we have seen the Dynamo's largest home crowds for some time. So, Glenn Davis has made this a point and I repeat it here, I think a realistic goal for 2012 is to sell out that building at least half the time. Take that, Rockheads and Dis-Astros.

So now it's time to write a new chapter in the history book in this most unlikely run. It was not that long ago, remember, that on this very site and many others we were lamenting the mediocrity of the 2011 edition of our Naranja Boys. But, holy moley, what a run this is that we are on. Truly amazing what a solidified backline, blistering hot goalkeeper and the inspired play of the man who in a True and Just World, is the 2011 MLS Most Valuable Player.

It is clear that in depth terms, the Dynamo are paper thin in many key areas. Who among us was not begging for Adam Moffat to stay card-free last night, as well as Danny Cruz. And how important now is it for Cruz to be qualified since Colin Clark seems to have disapparated? (Anyone have any word on Clark's health status? My Google Fu skills have been focused on Kansas City songs right about now.) JeVaughan Watson was a peripatetic whirling dervish last night of solid plays and screw-ups, often within seconds of each other. If he's Cruz' replacement along the right line... I shudder to finish that statement. My preferred sub over there is either Alex Dixon (Hey, I sound like Michael_D now!) or bring in Jermaine Taylor, move Ashe up and switch Mr. MVP to the right.

A tactical breakdown of the Wizards is coming, specially how Dynamo stack up against their 4-3-3 and what I consider to be a weak backline, as well as how the Wiz have not been tested against a tough opponent, how Kei Kamara (for whom I root generally) is a space case, how the Sporks are ripe for the picking and how Peter Vermes is, IMHO, like Idiot Nowak also Dominic Kinnear's tactical inferior, but not in this space right now. That will have to be left for this afternoon or tomorrow. For now, we leave with one more look back at last night, the words of St. Dom as well as a sendoff to points near North from the Fab Four.