Pointing to the Stadium name

Share All sharing options for: Pointing to the Stadium name 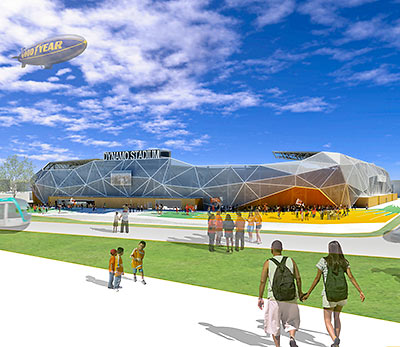 So with the news that that the BBVA Compass name wil be pretty much dominant in our lives for the immediate future (Press conference today at 3 p.m.), let me just say for the record that I am thrilled that BBVA is sponsoring this stadium. That is the bank that provided financing for the deal waaaay back in 2007, and then stuck with the deal through all of the county and city shenanigans. BBVA was a constant in this deal, believed in this deal from the get-go and never wavered (that I know of). They have a history in football, being the name sponsor for La Liga the most visible proof of this. We are in a great position having the involvement of that bank. I don't bank there, but I have one about three blocks from my house and have gone out of my way to use the ATM there when I can specifically because of their constancy as a partner in the stadium deal, leading to conversations kinda like this:

Wife: "Why are we passing this ATM to go over there?"

So why do I want to focus on the Compass name? As I wrote last week about this, I was kind of hoping to avoid the macro-syllabic, corporate sounding name. BBVA Compass is a great name in the banking industry, but I would really prefer if the stadium was just BBVA Stadium or, much, much better, Compass Stadium. As Gribbs indicated inthe comments of the last post, the possibilities of riffing on the Compass name are endless. It's also simple, compact and has that great hard "K" sound.

And as an aside, does anyone know, is it going to be the American or Spanish pronunciation of BBVA? (Bee-Bee-Vee-AY or Beh-Beh-Veh-AH?) BBVA is a Spanish bank, which stands for Banco Bilbao Vizcaya Argentaria. Only in its BBVA-Compass incarnation, and in the typical corporate stretching of definitions, is it an "American" bank. (History here.)

Now, I am not about to be a gloomy gus about all of this. My objections are cosmetic only. I think Gribbs has also pointed the way. Just because the name of the stadium has nine (count 'em!) syllables, does not mean we have to use all nine. So perhaps it's time to start on the nickname parade. Here are a few off the top of my head:

The Comp or just simply Compass. This is nice, short and sweet. Though it's more a riff on the name than on the team or sport or city. It doesn't really say a whole lot other than being self-referential. Still, two sharp, quick syllables are better than nine.

Dowling Street. I remember proposing this last year. Dick Dowling, for whom that street is named, was an Irish immigrant, and was considered Houston's first most prominent citizen and hero. However, the heroism for which he was known was for fighting for the Confederacy in the Civil War. So perhaps a mark against? However, one thing in his favor is that after the war, instead of resting on his laurels, he created the Bank of Bacchus, the foremost saloon in the Bayou City. So we have a "bank" connection, a Houston history connection and clearly the guy had a Houston-like ironic sense of humor. Also, Dowling Street is the street where Clyde Drexler's parents had their barbecue joint. When they retired, that left a huge hole in Houston barbecue. Until this stadium was built, that was my association with Dowling Street, so I like this name.

Walker Street is the southern border of the place. It's named after either Robert J. Walker, a Mississippian who helped in the annexation of Texas or Samuel Walker, a Texas Ranger who helped develop the Walker Colt revolver. I know. I'm asleep already.

Eastdown or Eado Stadium. I like that it refers to East Downtown, but other than that, perhaps a bit too obscure?

The Bank. This one has multiple good points. First, the obvious reference to BBVA Compass is there. Also, it has a perhaps distant reference to Dick Dowling's Bank of Bacchus. I also like the phrases it conjures. "Taking it to the The Bank"... "Dynamo have Banked that win" and more like that. You can do worse than a nickname like that.

Some others: DynaBank, Ground Orange (like Ground Zero), or just simply