The Dynamo's new home has a name, officially...and a cool new logo. Here is the official press release from the club along withe stadium logo and an updated rendering. Fancy! 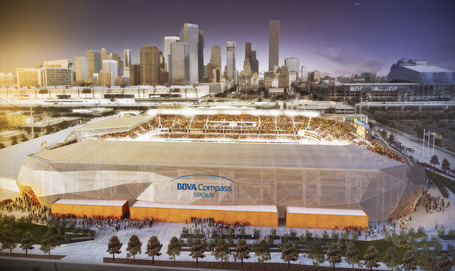 BBVA Compass Stadium is set to open May 12.

"We have always believed that Houston was one of the most important and passionate sports markets in the United States," said Timothy J. Leiweke, President & CEO, AEG. "From day one, our fans have been phenomenal in their support of the Dynamo which in turn has been MLS' best team the past six years. Now, with today's announcement and the brand new BBVA Compass Stadium, we have a partner that not only shares our vision for the stadium but our franchise's commitment to the community. We are grateful to the City, Mayor Parker, and BBVA Compass who are as dedicated and devoted to the Dynamo, to the market, to our fans and to our community as Mr. Anschutz, Gabriel Brener and Oscar De La Hoya."

BBVA Compass Stadium, which will seat 22,000, is the newest addition to Houston's professional sports landscape. This state-of-the-art facility will be home to the Houston Dynamo soccer team and Texas Southern University football. The open-air stadium will also serve as the host venue for concerts, festivals, boxing, high school sports, soccer "friendlies," sports championships, community and special events and more.

"This is great for Houston," said Manolo Sánchez, BBVA Compass president and CEO. "BBVA Compass Stadium will be a major step in revitalizing our urban core. And it will showcase the most popular sport in the world, one that upholds the values of BBVA Compass: teamwork, effort and fair play. We look forward to a long and enduring relationship with the Dynamo and Major League Soccer."

The City of Houston has already benefitted from the stadium's development with 1,500 construction and related jobs. Another 300 jobs will be added once the venue opens in spring of 2012. BBVA Compass Stadium will generate $32 million for the local economy while jumpstarting the revitalization of the area east of downtown, where a new light rail line is already under construction.

The new home of the Dynamo will also be a good for the environment, as this facility promises to be the most recycled and sustainable stadium ever built. In fact, steps have already begun for certification under the Leadership in Energy and Environmental Design (LEED) system with the United States Green Building Council to become the "greenest" stadium in Houston and one of the only LEED certified sports venues in Texas.

"I would like to thank BBVA Compass for sharing our vision for the future and our commitment to the community," said Dynamo president of business operations Chris Canetti. "Together we will utilize the stadium as a driving force toward making a positive impact on the city. This announcement, along with the stadium opening and the team's success, is another example of the great excitement surrounding the Dynamo organization. We look forward to a long and prosperous relationship."

A central component of the Dynamo and BBVA Compass agreement calls for the creation and implementation of a newly developed "Building a Better Houston" campaign. Through this initiative, both organizations have committed to making a difference in the neighborhoods surrounding the new stadium. The campaign will initially focus on four programs carried out one per week in the days leading up to the stadium's opening. These will include programs focused on educating school children, encouraging physical fitness, sustaining the environment, and revitalizing Houston's East End.