Dynamo give look at the future

Share All sharing options for: Dynamo give look at the future 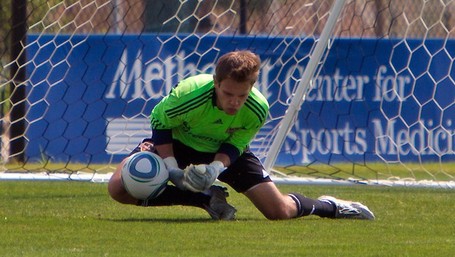 If you're like me, you're watching football around the globe, following whatever teams you enjoy following (I hear there are other teams out there that are not Celtic and Barcelona, but that may just be a rumor.), and are just slowly burning, wanting to know why these teams are not in Orange. Well, the Houston Dynamo, like the big guy in the red suit and the reindeer fetish, are here to to answer your desires.

The annual Dynamo Academy Showcase Game will be played tonight at 5 p.m. at Houston Amateur Sports Park. Here's a quick release from Dynamo detailing who will be there (not Sebastien Ibeagha, who as we have heard already, is in Florida at the US Men's Olympic Camp).

HOUSTON, TX (Monday, December 19, 2011) -- The top prospects from the Houston Dynamo Academy, presented by Statoil, will be on display Monday night in the annual Dynamo Academy Showcase, set to kick off at 5 p.m. at the Houston Amateur Sports Park.

First team head coach Dominic Kinnear and his staff will be on hand to evaluate players, with a full match pitting the Dynamo's college-protected players and select guests against players from their U-18 and U-16 teams.

Dynamo Academy home-grown players may be signed to the Dynamo first team without being subject to the MLS SuperDraft or the allocation process. Houston has signed four players from its Academy, goalkeeper Tyler Deric (Klein) and midfielder Francisco Navas Cobo, both of whom made their professional debuts in 2010, and midfielders Alex Dixon (Humble Atascocita) and Josue Soto (Prepa Tec, Mexico), both of whom competed in last year's Academy Showcase.

In case you're wondering what you might see if you can get out there this evening, here's a lookback to the 2010 event.

It's not the first team, but it's a nice Holiday present to those of us who can (A) get down to HASP for the event and (B) just want to see some guys in Orange kick a ball in anger. That's a pretty nice deal, anyway you slice it.

And speaking of Ibeagha, here's an interesting Twitter exchange between Soccer by Ives' Ives Galarcep and Taylor Twellman during the US Olympic Camp intrasquad game yesterday:

@TaylorTwellman @SoccerByIves he is a bit of a between the ears project. Athletically gifted but not the brightest esp during college ball

@SoccerByIves @TaylorTwellman Most young CBs need to learn the position, where better than at Houston, w/Dom Kinnear, Boswell and Cameron?

Make of it what you will

Meanwhile, here's an update from the Olympic Camp, including a certain right midfielder with which we are all well-acquainted.