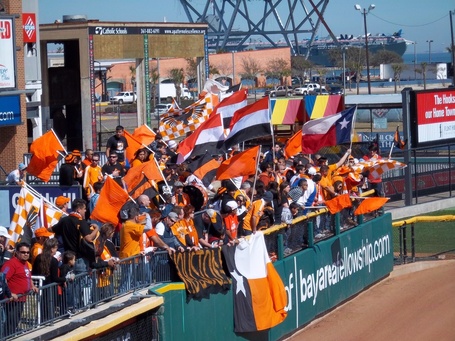 Even in the pre-season, beating FC Dallas is fun. The only thing better is completely annihilating them and on Saturday afternoon at Whataburger Field in Corpus Christi, the Dynamo did just that.

Brad Davis was involved in three of the four Dynamo goals, scoring one off a free kick, assisting on Geoff Cameron's header and sending the cross in to the box that led to the FC Dallas own goal. All in all, a fairly successful 45 minutes for the Dynamo midfielder.

"Set pieces are something our team has done pretty well in the past." Davis said after the match. "I put some good balls in there, the first one was touched in by one of their guys and the second Geoff  attacked the ball very well."

"I won a foul at the top of the box and luckily hit it well and found the back of the net" David said.

The match was extremely physical for a pre-season match, but considering the rivalry between the two teams, a certain level of physicality is to be expected. The 20 whistled fouls by referee Jasen Anno are one thing, but the extra curricular activity involved Cameron and FCD's Jair Benitez are another thing entirely.

Cameron was suffered a large number of the fouls and things finally boiled over late in the first half after a particuarly tough tackle from Benitez. The FCD midfielder got in to a verbal confrontation with both Cameron and Brian Ching and according to Ching, spit in Cameron's face. There was no action taken against Benitez by the referee who apparently did not see ithe incident.

"The only thing that marred the game was Benitez spitting in Geoff's face," Ching said after the match. "You don't need that."

When asked about the incident after the match, Dynamo head coach Dominic Kinnear admitted he did not see the incident, but believed his player's description of the events.

"I didn't see it but if our players said he did then I would believe them." Kinnear said. "I don't think there is anything you can unless someone saw it, I think if they would have seen it they would have sent him off."

Danny Cruz, who played in the second half, was extremely active on the right side and after trialist Steven Morrissey was pulled down the box in the 93rd minute, Cruz converted the penalty, beating new FC Dallas goalkeeper Chris Seitz.

I'll have more on the spitting incident and a report on another somewhat ugly event tomorrow in Monday Morning Centre Back.