I noticed there seemed to be a severe lack of FanPosts, so I figured I’d drum up a worthwhile series to read and write some stuff myself. Who knows? Maybe someone will actually comment on it or gain some valuable insight they didn’t otherwise have before. Or maybe not. More after the jump.

This series will take a look at the four basic positions – GK, D, M and F – and the players that the Dynamo currently have in those positions. I’ll do my best to make it a good read, but it’ll really depend on interaction from everyone else to make this worthwhile.

Playing a 4-4-2 means the Dynamo place slightly less emphasis on their forward and more emphasis on their attacking Mids and Wingers. Even still, it is important for the Dynamo to have at least one of their two forwards be able to hold the ball well, and create opportunities when none present themselves. We are all aware of the primary forward, Brian Ching. He will play the most in the forward position, but who plays alongside him will probably change as the season wears on.

At 32, Brian Ching is no spring chicken, and actually much to my own surprise Chinger is tied for oldest player on the Dynamo roster with Defender, Eddie Robinson. Over the course of a long season, Ching will invariably wear down, and he will need rest in order to keep him in the best shape for as many games as possible. I think Ching’s rest games will be the times we will Jason Garey and Cam Weaver holding down the fort. Even still, the times Brian can manage to keep himself on the pitch, the better the chance the Dynamo have to win. It’s rare to find a player with such commitment to a franchise like Brian has had with Dynamo, and to that end we all know the fans are unanimously grateful of his contributions. 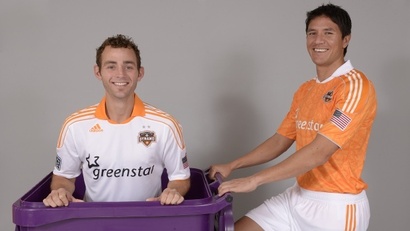 The second oldest forward of the bunch, Cam came to the Dynamo during his first season in MLS in 2009. Previously, Cam played in Scandinavia, and has shown he can score goals if he can stay healthy. Last season he started 9 league games and scored 3 goals with one assist, almost of them coming after his early season injury. Back at near 100% health, Cam looks to try and add to his tallies, and hopes to snatch the other starting forward spot opposite Brian Ching. It’s not going to be a cakewalk with both Jason Garey and Will Bruin nipping at his heels for playing time, too.

Jason is going to vie for plenty of playing time up front with Brian Ching during the season. He’s the kind of player who comes in and just makes things happen, and always seems to be around when the ball finds the net. He’s proven he can score at the MLS level, and do so at crucial times. Garey’s gained time in Open Cup, Champions League, and even MLS Cup Playoffs already, and looks to add to that experience this season with the Dynamo. He’ll play hard, and play with enough pace to keep the defense on its toes. I believe personally if Garey gets time up front opposite Ching, he will find the net on numerous occasions.

The youngest player and also the lone rookie in the forwards, Bruin will press for playing time early on as a substitute. By midseason, he could even press Brian Ching for starting minutes, and will be the one to take Chinger’s place when he needs a game off to rest up. He is a powerful player, one the Dynamo expect to contribute this season in some fashion, and in many seasons to come. In my mind, he is the replacement to Brian Ching as both are very similar players on the pitch. In 20 games at the collegiate level in 2010 he netted 18 goals with 5 assists to boot. The kid can score, and he can do so while making it look easy. I am highly excited to see him in Orange, and hope to see him in Orange for a while.