Now that we’ve hashed and rehashed our thoughts on the Dynamo Forwards, it’s time to delve into the vast quantity (and quality) that is the Orange Midfield. I know I said I was considering splitting the Midfield into two groups, Wingers and Mids, but it is just far easier to do them altogether. More after the jump.

This series takes a look at the four basic positions – GK, D, M and F – and the players that the Dynamo currently have in those positions. I’ll do my best to make it a good read, but it’ll really depend on interaction from everyone else to make this worthwhile. The interaction in the Forwards post was awesome. Let’s try to keep up the enthusiasm with this one, too! And if you didn't read the previous article on the Forwards, for shame and click the link below for the goodies.

The Dynamo typically will employ a 2 Wing, 1 Attacking Mid, and 1 Defensive Mid set. The rotation and specific positioning is a bit of ebb and flow depending on defensive positioning versus offensive positioning, so while the Attacking Mid tends to play up the Forwards on offensive possessions, depending on where the ball is and who is attacking he may actually play a bit to one side or the other to turn the 4-4-2 into something akin to a 4-1-3-2. It all depends on whether Dom is focusing on the attack or on defense, but that’s true about any team and any coach really.

What I believe sets the Dynamo midfield apart is Dom’s ability to produce blue chip midfielders through the reserve team and Academy. He has an uncanny ability to find guys with the right talent proportions and turn them into creative machines both on set pieces and during the free flow of play. There are teams who have to go out and find the creative midfielder to supply the Forwards, Dom grows them in his own background.

For this position it almost becomes advantageous to separate the Wingers out, even if ultimately we still combine them with the Midfielders for a complete look at Midfield. So let’s start there. 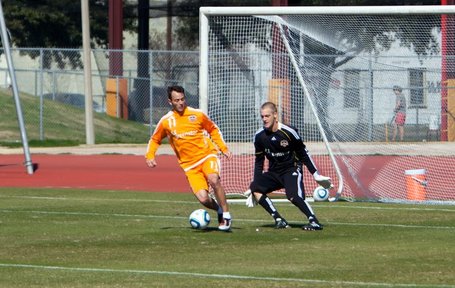 Appiah is a quick, athletic winger who typically plays on the right side. He can be explosive in getting down the line (ala a young Mullan) and can get the cross into the box when given the space to do so. Playing in highly limited minutes (37 in MLS League matches), he’s managed to still notch a goal on the only shot he’s put on target. While being highly effective, he is still being groomed, but I believe it’s very possible we will see more of him this season as a backup to Colin Clark or Danny Cruz (more on this in a bit).

The beloved shorty (5’5") in Orange is deceivably quick, but he’s also becoming very smart in his play. While being fairly limited in starting action, he’s managed to find over 4500 career minutes in League Play. Over those minutes he’s notched only one goal, but he’s assisted on 11 others. His size can be a hindrance on set pieces and when he is playing anything other than Wing. Typically the Dynamo employ Ashe on the left or right side Wing position, though his preferred foot is his left. For this reason I think it’s fairly safe to assume he’ll see plenty of action behind Brad Davis, especially when Davis is in need of some good rest.

The unknown x-factor in my opinion for the Dynamo this season is Clark. He’s had a fairly bad run of ACL injuries in 2 of the last 3 seasons, but looks to have finally made a full recovery back to match fit. He’s not super speedy, but he’s incredibly technical in his approach to the game and getting to the goal. In his over 6000 minutes in MLS play, he’s netted 10 goal and assisted on just as many. At 26, he’s still young enough to make a direct impact, and if he remains healthy could provide the same spark and intensity Mullan used to provide, and most likely on the same side of the field, too. He’s flexible to either wing position, making him a versatile winger who can move about as Dom’s needs change.

Most people recognize Cruz’s incredible speed. When matched with equally speedy defenders he still finds ways to pass them. At 21, he is one of the three youngest midfielders on the roster, and the only one under 24 to have seen any significant action on the pitch. Over 1400 career minutes, and he’s netted 2 out of his 11 shots on goal, tacking on an additional 2 assists. The kid is simply young and still a bit raw. Technically, he’s not super sharp with the ball unless he has space, but these are things he’s working to improve and will help him become a midfield mainstay for the Orange. His versatility at forward and midfield means he will continue to see plenty of substitute minutes, and should continue to find opportunities to leave his mark on games.

Davis is the mainstay of the Wingers. He is incredible with set pieces, whether serving them in from a free kick or from a corner. His service from the Wing in free play is almost always on-point, and he has the stamina of a workhouse to boot. In preseason play he’s notched goals from the free kick points, and has assisted on a few from the outside wing position as well. The one thing Davis has in droves is heart. The guy simply wants to play, and he definitely wants to win. On the pitch and off the pitch he is a class act, and the Dynamo Fans on the whole can definitely thank him (along with many of the original Dynamo players) for their play on the field and off as being a big part of why we’re looking at a new Soccer-focused stadium in just over one year’s time from now.

At 19, Francisco is one of the youngest players on the Dynamo active roster. He has tons of talent and athleticism, a lot of which is still quite raw. He’s extremely quick when he needs to be, but he’s also very strong with his shot. He can be deployed on either side of the pitch, and is just as effective in either position. This will be his first full season on the active roster, and I think it’s safe to say he’ll see his fair share of substitution minutes pushing the other available subs for their minutes, too. It’ll be interesting this season to watch him grow into the Professional Game Speed, and there will be a good deal of a learning curve as well.

The other two positions the Dynamo typically use Midfielders for are the Central Defensive Midfielder and Central Attacking Midfielder. As I noted before, a lot of the attacking play can be free form and thus a player who I list as a CAM or Winger could player either position almost interchangeably. There are few exceptions to this rule, and the players below with the exception of Lovel Palmer are as free form as the Wingers listed above. 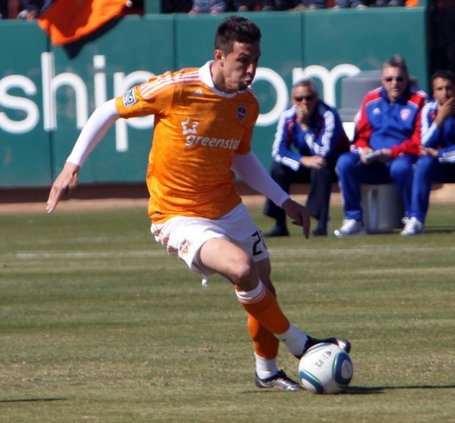 In my mind, I see Geoff Cameron as a bit of a floater. He’s going to fit in at any position thanks to his height, his unbelievably deceptive speed, and his talent with the ball. Cameron is the opposite of raw talent, having been thrust into a prominent starting defensive back role the last two seasons with the occasional shift to midfield when Dom so desired. He’s incredibly heady and smart, with solid vision and even some creativity to put the ball beyond the defense for the Forwards. With that said, he’s going to find plenty of time on the pitch, the only question is at which position. Though, the Dynamo are grateful to have him be as versatile and flexible as he is. At 6’3" he is the only over 6 footer in the midfield, and no doubt will look to utilize his height to his advantage on set pieces and during free play.

Having just been signed to the active roster within the last couple of months, Dixon is capable of playing Attacking Mid as a substitute. He’s also extremely raw in his skill set as most Academy call-ups are. Dom definitely believes in him, and I hope to see some quality substitution minutes from him. He has incredible ball skills, and he can serve it in from outside should play dictate the need. I think the most important facet to Dixon is his toughness, as that is one thing Dom and the Dynamo covet in droves. One final note about Dixon, watch out for his athleticism. He isn’t just quick, he’s agile and has incredible balance. If he can learn to truly utilize his athleticism to his advantage on the pitch he’ll be virtually unstoppable once he receives the ball.

I’ll be honest, I don’t know how Lovel managed to stay on the pitch for so many minutes last season. It shows Palmer’s toughness, and also how skilled a defensive midfielder he truly is. He’s solid at stopping the opposing attack, and can get the ball out to the wings with ease. Perhaps his most coveted weapon is his long-range ability. The guy can net it from insane distances, though he isn’t nearly as accurate as he sometimes seems to think he is. Either way, he’s a tough-nosed tackler who gets his fair share of fouls sometimes resulting in a harsh red card here and there (though I personally think most of his red cards are just overblown acting on the part of the attacker). He’s going to get minutes in huge chunks again this season as a starter, and will hopefully get the opportunity to strike a few more times from outside the box. Everyone loves to see the power when it’s on the mark.

Young and creative define Soto as a player. Incredibly talented, but just like the vast majority of the Academy players, he is also very raw. He will need plenty of substitution minutes in order to let him adjust to the Professional Speed of the game. Even still, he has had plenty of collegiate experience, meaning he’s not completely green under the collar. If he’s allowed to continue his development, and being a Dynamo means he will, he will become a force in the midfield a la Stuart Holden. His skill set is similar to Holden’s, and his creativity is on par with Stu’s as well. It’s going to be up to him to continue to put in the time and effort to grow into the player I believe he can be, but if he does – look out. This kid is going to be something special in a couple of years, mark my words.

The Dynamo will look to mix up the pace and the creativity on the ball. I think we can regularly expect Colin Clark opposite Brad Davis as Wingers and Lovel Palmer as the Defensive Mid for starters. As for the CAM, I think it’s pretty well open at this point, and suspect the Dynamo might look for an International DP to fill the void there. Though, being the Houston Dynamo, it is entirely possible they will find the element they need from within their existing ranks. Losing Brian Mullan hurt the Dynamo, only because anytime you lose that amount of experience on the wing you are replacing it with far less. I think Colin Clark can be a solid replacement for him as long as Clark remains healthy.

That concludes the Midfielders, I look forward to reading your thoughts and comments and seeing what observations I’ve missed (I assure you I’ve missed plenty) that you’ve picked up on.