Share All sharing options for: The Anti-Power Rankings: Week 25

#5 - United to Stay Glazed: The Glazers are "fully committed" to Manchester United and have no intention of selling the club despite the continued "protest" from fans. I put protest in quotation marks because buying a brand new United jersey and then wearing a green and gold protest scarf over it is just stupid. There are genuine fans out there who are against the Glazers and they are likely making legitimate protest, those idiots at Old Trafford are not protesting anything. They are trying to be cool with the scarf while opening their wallet for the Glazers. Sorry, but you can't have it both ways.

#4 - Bad Captain, No Trespassing: Typically you don't want your team captain to get arrested for trespassing in a hotel hallway, so you can imagine how pleased the New England Revolution are with Shalrie Joseph. Last season the team had to deal with Joseph's marijuana issue and now he's earned himself a ticket back home after he can't behave himself. There's no question about Joseph's importance to the Revolution but there is a point where any player can where out his welcome. It will be interesting to see how much New England is willing to put up with.

#3 - Well Look Who Finally Came Back: How nice of David Beckham to finally join up with the LA Galaxy. Let's see how long it takes before he's injured or leaves again. What a bust he has been in MLS and short of being league MVP and leading the Galaxy to a MLS Cup this season, there is little he will be able to do redeem himself. The sooner this guy is gone, the better. He's made a mockery of MLS and really done nothing but insult American soccer fans.

#2 - As.com Makes an Ass of Itself: The web site AS.com posted a photograph of the controversial first goal Barcelona scored against Atheltic Bilbao last weekend. There was a fair amount of debate as to whether or not Dani Alves was offside. There is no doubt it was a close call, but AS.com went a little overboard in their attempts to show that the fullback jumped the gun. The top image was the original picture posted by the website, the bottom is the corrected image. See if you can see what's missing from the first. 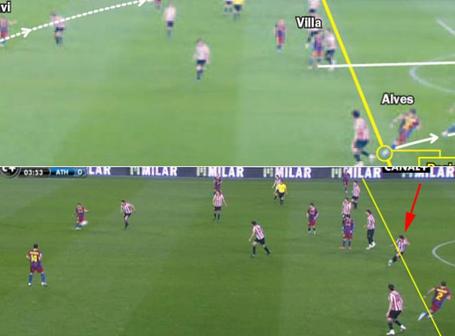 #1 - What a Dive: We've all seen bad dives over the years. Like it or not, it's part of the game. However, things have been escalated to a whole new level of pathetic with this dive from Chilean U-20 defender Bryan Carrasco. Unbelieveable.