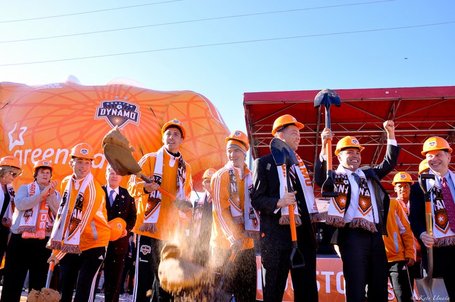 At last, the shovels are in the dirt and construction can begin on the Houston Dynamo's new downtown stadium. It's been a long time coming for ownership, staff and fans and all the speed bumps and after all the delays and political debates, it sure feels great to be a Dynamo fan. All that matters now is that this time next year, we'll be preparing to open a beautiful new soccer stadium in Houston.

I'll be posting pictures as they become available, but for the time being, here is the Dynamo's press release on the groundbreaking ceremony and quotes from various important individuals who've been a part of making this day happen.

Check out the press release and quotes after the jump

Excavation of the site and construction of the stadium is expected to begin shortly, and the Dynamo hope to play their first game in the new stadium by mid-2012. The stadium is located in downtown Houston, within walking distance of Minute Maid Park, the George R. Brown Convention Center, and the Toyota Center. In addition to soccer games, the new stadium will host Texas Southern University football, concerts, boxing matches, and more.

The stadium will be operated by the Dynamo and leased from the Harris County-Houston Sports Authority. It is located closer to downtown than any other American stadium built for soccer and will be easily accessible to fans from the entire Houston area.

AEG Facilities, the world's largest venue manager, will manage the stadium on behalf of the Dynamo. The stadium will be included in AEG Facilities' worldwide network of more than 100 elite venues across five continents.

Renowned architectural firm Populous designed the stadium, which will be constructed by Houston-based Manhattan Construction and overseen by the ICON Venue Group. Additional companies working on the site are landscape architect Clark Condon, structural engineer Walter P. Moore, and civil engineer WGA, all companies based in Houston.

Tickets for the Dynamo's new stadium will be offered first to fans holding Dynamo season tickets, which are on sale now at HoustonDynamo.com or by calling (713) 276-7500. Fans with longer consecutive tenure as season ticket holders will have higher priority to choose their seats. Interested parties may also sign up for a waiting list for tickets in the new stadium in 2012 at DynamoStadium.com.

The Dynamo's 2011 MLS regular season opener is set for Saturday, March 19, against the Philadelphia Union at Robertson Stadium. Tickets are available at HoustonDynamo.com.

Dynamo President of Business Operations Chris Canetti
"The Dynamo organization has enjoyed many memorable moments in its first five years, but up until today this moment has only been a dream. Now our dream is coming true, and with this moment, our very own stadium will soon be a reality. We couldn't be more excited and thrilled."

"There are many people to thank in making this come true. I thank the Dynamo fans and sponsors for their incredible support, the owners for their commitment, the City of Houston, Harris County and the Sports Authority for their vision, TSU for their partnership, and the team for its work on the field and in the community in serving as a catalyst to everything. Thank you; our organization is grateful."

"I truly believe that this will be one of the finest soccer-specific stadiums in North America. Its location cannot be matched, and the design will provide for an authentic international soccer environment. It has been designed with the thought of our fans in mind, and there are many different elements that will offer an incredible experience for everyone."

AEG President and CEO Timothy J. Leiweke
"We have believed from day one that the development of a stadium designed for soccer would be the pivotal piece needed to ensure the long-term stability of the Houston Dynamo. Along with Gabriel Brener and our other partners at Golden Boy, we are proud that the new stadium will pay a key role in the continued growth and development of soccer, not only in Houston, but throughout South Texas."

"From the day it opens, this stadium will not only be the region's home of the most important national and international soccer matches, it will also be the home of the biggest concerts, special events, football games and other sporting championships. This is truly the beginning of a new age, both for the Dynamo and the Houston sports and entertainment landscape."

"The city of Houston will clearly benefit from this project. From the construction workers building the stadium to the thousands of permanent jobs at the stadium and nearby businesses, the local economy will see a tremendous boost in all sectors. As we have seen in similar projects in other cities, the matches, concerts, and other events taking place in the stadium will bring in great benefits to the city, both in terms of money and influx of people from other cities and countries. The construction of this new stadium is a win-win situation for everyone."

"The ability to develop a soccer stadium in a city that supports its sports franchises is the biggest reason we brought the Dynamo to Houston. We moved the team with the promise that we would build it a suitable stadium that they could call ‘home.' Now, because of the tremendous support we have received from the City of Houston and Harris County, the City Council, Board of Supervisors, Harris County-Houston Sports Authority, and Texas Southern University among so many others, we're proud to say that we've turned that promise into a reality. This team has given Houston two championships and a variety of great games throughout its brief history. Now we're giving its players the opportunity to continue creating memories in their own, state-of-the-art, soccer-specific stadium. I promise to the City of Houston, we will build you the finest facility for soccer ever created...we won't let you down."

Dynamo equity partner Oscar de La Hoya (Golden Boy Promotions)
"As one of the team's owners, I have to say that this is a very proud day for me. We've fought many battles to ensure that the Dynamo have a suitable stadium to play in, and now, after years of negotiations, we're at a point where we can say we've delivered for our team. This is a day for soccer fans all over Houston to rejoice and enjoy."

"Now that the stadium is a reality, we can definitely consider it as a venue for high-profile boxing matches. Houston is known nationally not only for having great soccer fans, but also for having some of the most passionate boxing fans in the country. That, added to all the talented boxers we have in this city, will make the new Dynamo stadium the place to be in Texas to watch not only great soccer, but also quality boxing."

Major League Soccer Commissioner Don Garber
"The ground-breaking for the Dynamo's new stadium is another step forward in building the beautiful game in North America. Soccer-specific stadiums serve as true homes for the community, and these venues are placing permanent roots for the professional game in the United States and Canada. More importantly, the Dynamo's new stadium will serve as an inspirational destination for the countless young soccer players in the area who will be able to play in the shadows of this incredible venue with the hope of someday playing on the same field as their heroes."

Houston Mayor Annise Parker
"We believe the stadium is going to be good for the citizens of Houston, excellent for that end of downtown, and it will spur economic growth around it. It will make a really dynamic triangle with the Toyota Center, Minute Maid Park, and now the new Dynamo stadium - with the George R. Brown Convention Center right in the middle of the action."

Harris County Judge Ed Emmett
"The new Dynamo stadium will be a winner for the Dynamo and for the residents of Harris County. Not only will it serve as the new home for a very successful team, it's an excellent example of local government and private business working together to provide a world class venue for a global sport."

Harris County-Houston Sports Authority Chairman J. Kent Friedman
"We are thrilled that the Dynamo was able to break ground on their new home. This has been a long and involved process, and the Sports Authority is pleased to have played a role in the project coming to fruition. Now our world-class soccer team will finally have its own first-class facility to call home, and TSU will have a premier space to play football."

"This stadium is a great example of a strong public-private partnership that will revitalize our local economy, creating jobs and opportunity for the citizens of Harris County. So whether you're a soccer fan or not yet a soccer fan, this stadium is cause for celebration."

Houston City Councilmember James Rodriguez (District I)
"I am honored to participate in this groundbreaking. I am confident that our Dynamo will continue to shine and serve as a driving force behind this area's continued growth and progress."

Texas Southern University President Dr. John M. Rudley
"One of our major initiatives was to bring a state-of-the-art stadium to Texas Southern University athletics. This new stadium has helped us reach that goal. It also gives us one of the best facilities in the Southwestern Athletic Conference. It's a huge boost to the overall athletic program."

Dynamo head coach Dominic Kinnear
"It's one of the main reasons why we came here a little over five years ago, so we've all been on the outside of it waiting for it to happen. It's finally happening, so it makes the move justified. I'm very happy for the organization, for the fans, for the city, and most importantly I'm very happy for the players who sacrificed for it in the first place."