How Bad a Referee is Abby Okulaja?

Share All sharing options for: How Bad a Referee is Abby Okulaja?

I'm going to preface this photo with a couple points to avoid confusion and unneccsary accusations of me being a sore loser or whiner.

1. The Dynamo didn't do enough to win on Saturday. The Union had a game plan, found their goal and frustrated Houston's playmakers all night.

2. Dominic Oduro should have tied the match and had one of the worst shanks in the history of MLS.

3. There were plenty of ifs, ands, whats and buts in that game. Those don't matter, you've gotta deal with the intangibles like pitch condition, weather and officials. That's soccer.

This photo is a prime example of why USSF referee Abby Okulaja is an incompetent match official. It's not his fault Houston lost, but he made a mess of the match and missed several easy calls. It's a broken record argument at this point, but I'll keep beating the drum because the USSF is assigning referees that do obvious damage to the quality of play and the credibility of their top division of club soccer. You be the judge. 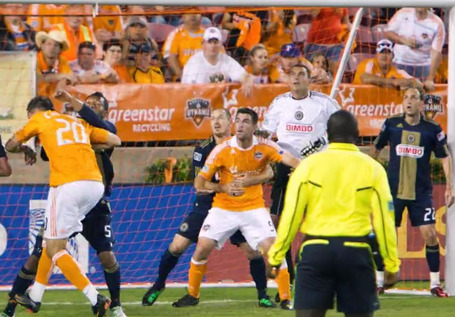 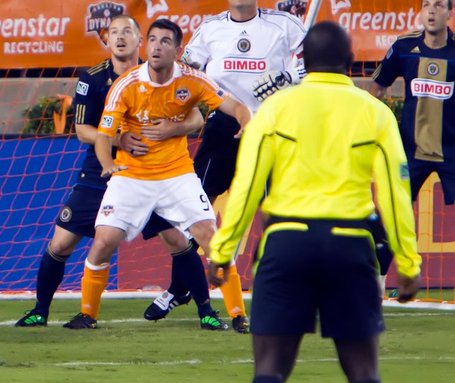