Monday Morning Centre Back: One Step Back

Share All sharing options for: Monday Morning Centre Back: One Step Back

I think I can safely speak for all Dynamo fans in saying that Saturday's match was not what we'd hoped for. Yes it's only the first game of the season and there is no reason to over react too much, but it's nearly impossible not to have a twinge of doubt inside your mind about how the 2011 season is going to play out.

Whether we want to admit it or not, Saturday's loss to the Philadelphia Union felt a lot like many of the Dynamo's losses in 2010. I don't want to take anything away from the Union but that was a game the Dynamo should have won and their failure to capitalize on the chances they did get and their failure to generate more chances speaks to both the Union's game plan and Houston's struggles.

What is even more frustrating is the way the Union scored off a set piece in which defender Bobby Boswell misjudged the flight of the ball and allowed Sebastien Le Toux to chest it down barely 6-yards from Tally Hall. It was these kind of defensive lapses that undid the Dynamo last season and a worrying way to start this one.

"It was a hopeful throw into the box." Dominic Kinnear said post-match. "We were just casual in our approach to address a dangerous situation. Any time a guy brings the ball down in the six-yard box off of a long throw, it's very slack defending, and you get punished for it. After they scored their goal, they just sat in and packed it in, and chances were few, but when you know a team is going to come in and do something like that, it's very important to come in and score the first goal."

As for Boswell he was noticeably disappointed after the match.

"The way [Sheanon Williams] throws the ball is the first throw we have seen," Boswell said. "It went over me, and I misread it. On the first two or three, he was throwing them lopsided, and they were spinning funny. I have never seen a ball thrown like that, and I have to make adjustments, and it's unlucky to give up a goal so early."

Fellow defender Andrew Hainault was disappointed as well but realized that letting the result effect the team mentally will not be the answer.

"It was an early mistake, so there is no sense in getting down," said Hainault. "There is a lot of time to turn it around. That is something that me, Tally, and Bobby have to sort out. We are not going to get down; we are going to make sure we keep the spirits up."

Understandably no one really commented on Dominic Oduro skying what should have the equalizing goal and the forward was dressed and out the stadium quickly after the match. The only reference to the miss came from Kinnear during his post-match press conference.

"We had one good chance, and if you don't score goals like that, you aren't going to win the game," Kinnear said. "That's a pretty good chance, a great play by Geoff, a good ball by Brad, and it's a goal that you should expect to score."

If we want to summarize this season's opening match we really only need one word: frustrating. Everyone was frustrated after the match from the coaches and players to the fans who all had hope for a more promising start to the season. That said, there's no need to panic. It helps that over half the league makes the playoffs and hopefully Brian Ching can get healthy soon and give the offense a boost.

The Dynamo have four days to re-group and prepare for a trip to Seattle to face the struggling Sounders who've yet to score a goal in two matches. Of course, in addition to battling a hungry Sounders team, the Dynamo wil have to battle the unpredictable turf surface at Qwest Field.

You can expect the Robertson Stadium field to be prepared differently before the team's next home game. Kinnear was unhappy with how wet the grass was, saying he wasn't a fan of the slickness and how it effected the speed of the ball. Hopefully the grounds crew will keep things a little drier next time.

Saturday's match also featured the return of Carlos Ruiz, easily the biggest diver and cheat to ever grace an MLS field. Ruiz was in fine form as usual, executing a couple of his trademark over-exaggerate dives and managing to plant an elbow in to Hainault's head. A move that should have recieved a red card but was allowed to pass with only a yellow. 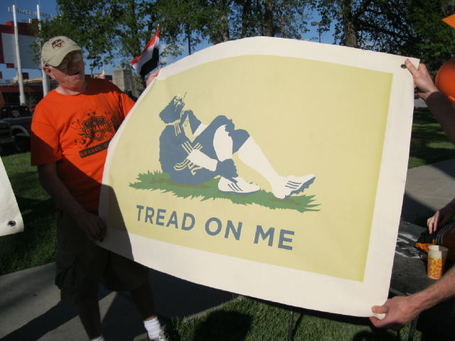 Bobby Boswell was more diplomatic about Ruiz and downplayed the apparent physicality of the match.

"Anytime Ruiz is on the field, you will get a couple of plays like that," Boswell said after the match. "I don't think the ref had that much impact on the game. You can throw a red on the one, but that is at his discretion. I don't think it was a rough night in terms of physicality, I just think it was tough for us to score. "

Speaking of the referee, Abby Okulaja was his usual awful self quickly losing control of the match early. As Will Bruin chased a ball towards the end line well to the left of the Union goal, Valdes shoulder checked the rookie as he crossed out of bounds sending him falling head first in to the boards. Jason Garey immediately confronted Valdes before be separated by Okulaja and Union goalkeeper Faryd Mondragon.

The most annoying and disturbing thing about the clash was that Okulaja didn't appear to say a single word to Valdes, instead choosing to chastise Garey for standing up for his teammate. Either the referee didn't see the incident (and didn't bother to check with his assistants) or he felt the contact was minimal. Either way, it was a bad no call for Okulaja and a typical performance from a typically bad USSF referee who is amongst the worst of what is a barely serviceable group.

Boswell's reaction was right though, no sense blaming divers (Ruiz) and cheats (Okulaja) for the Dynamo's lack of production in the final third. They'll just have to learn from the loss and move on and there is still plenty of time to get things going in the right direction.

Still, nobody liked suffering the first home opener loss in the team's history.

Here are some more quotes from after the match.

"It was a disappointing night. We gave up one chance and lost the game. We created a few chances, and we came out without anything."

"The grass was wet, which I wasn't a fan of because the ball was playing too fast. They just killed the space. We had some good moments, and when we were getting in good areas, our delivery wasn't really what it was. The season is not over, though, there is still a long way to go."

"We have a new group of guys, and it's a new season. I think if we had gotten one, it opens up the game. It is a game of goals, and it wasn't going in right, and we weren't helping ourselves out by not putting it in the frame. We didn't help ourselves out giving up one so early."

"It's never good giving up a goal early on and it's frustrating especially from my side. I think I can come out and be a big goalkeeper right there and prevent that scramble. I think the team did well to battle back and fight. I thought after that they really didn't have any good looks at goal and I thought we were pressuring their goal for the last 85 minutes."