Share All sharing options for: The Anti-Power Rankings: Week 28

#5 - Nobody Wants to See That: For some reason 19-year old Liverpool player Jonjo Shelvey thought it would be a good idea to put a picture of a penis on his Twitter account. Guess what? It's not...shocking I know. Jonjo has apologized using the always convenient, "one of my mates messing around with my phone!" excuse. While it's probably the case, you might want different friends. Thank the Flying Spaghetti Monster I don't follow this guy on Twitter, the last thing I want to see is some guys unit.

#4 - Ochocinco Day: NFL player Chad Ochocinco's much talked about trial with Sporting Kansas City finally happened this week and you know what? It was really positive. Chad showed the people willing to pay attention that playing soccer is not easy, that the level of conditioning required is extremely high and the sport is anything but "one for sissies". Sadly, Jermichael Finley of the Green Bay Packers didn't pay attention and mouthed off about Chad's trial on Twitter.

Man I think this cat @ochocinco is a clown. Bruh soccer seriously, sit down an wait for this lockout to b over and play what u no best.

Guess what Jermichael. You wouldn't last one second on a soccer pitch, despite the fact you're a good athlete. Just shut up please.

#3 - The Reign of Terror To End? Assuming football's biggest nutnick Sepp Blatter gets re-elected as FIFA president, at least we might have a light at the end of one of the longest and darkest tunnels in sports history. According to Blatter, this next term would be his last and he would step down in 2015. Tell you what Sepp, do us all a favor and step down now. We really don't need another four years of your stupidity...then again Mohamed bin Hammam isn't sounding any better right now. It's basically like choosing between going blind or going deaf.

#2 - Ridiculousness Knows No Bounds: As if awarding the 2022 World Cup to Qatar in the first place wasn't absurd enough, we keep getting story after story about the asinine ideas they are coming up with to deal with a simple fact...IT'S TOO F'N HOT TO PLAY A SUMMER TOURNAMENT THERE! In yet another "grasping at straws" idea on pair with air conditioning the stadiums, Qatar is discussing using mechanical floating clouds to provide shade over the stadiums. Really? A Giant hovercraft cloud? Wake me up when FIFA pulls their collective head out their ass and moves the tournament to a legitimate host country. One more thing, if it's hot outside, it's still hot in the shade.

#1 - Curlertonian: Despite being an Evertonian, even I have to point out this amazing image. Towards the end of last weekend's Everton/Fulham match at Goodison Park, the cameras found one of the most amazing sights in the history of crowd photography. I give you, The Curlertonian! 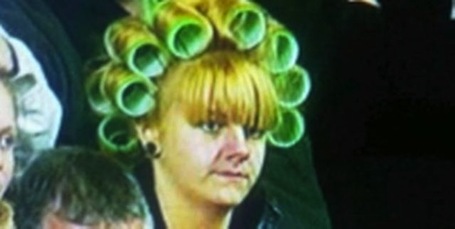