Share All sharing options for: Houston Dynamo - The Backline Boys

I know there are a select two or three of you who were looking forward to the next position breakdown article, and I apologize for its tardiness.  It’s been a long last week and a half to say the least.  But enough of me apologizing, onto what you want, the breakdown of the Houston Dynamo defensive players.  More after the jump.

This series takes a look at the four basic positions – GK, D, M and F – and the players that the Dynamo currently have in those positions.  I’ll do my best to make it a good read, but it’ll really depend on interaction from everyone else to make this worthwhile.  Thank you for your participation in both the positional breakdown of the Dynamo Forwards and Midfielders!  It means a lot to know I can espouse my ramblings and opinions onto others, even if they disagree. 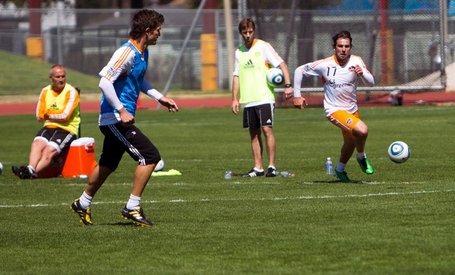 Like most teams will, the Dynamo usually deploy a four-man backline.  The defenders on the wings will usually press up on attacks, and become a secondary winger.  Meanwhile, the center backs are the true defensive force, typically staying a little further back from the wing defenders with the purpose of preventing a counter attack from the opposition.

This particular setup requires the center backs to be quality tacklers and with enough pace to try to prevent breakaways.  The Center Defending Midfielder could at times be considered a vital part of the defensive backline up the middle, as he can play as a third central defender sitting further up the field.

One of the most important parts of the Dynamo defense approach is coverage and protecting teammates on defense.  When a one-on-one situation occurs, another Dynamo defender will slide back just a little back to ensure if the first defender is passed, he will be there to either slow down the attack or stop it entirely.  This yields a healthy number of takeaways, and prevents a large majority of the huge breakaways which can occur when an offense pushes further up the pitch in attack mode.

Enough breakdown, time for the individuals who comprise the Dynamo Defense.

Boswell came to the Dynamo in the offseason of the 2008 season and showed why he was so highly coveted by the team.  In his 3 seasons with the team thus far, he has proven as solid a central defender as any in the league and also as a defensive general on the field.  He’s extremely heady, typically playing with a good amount of intelligence to not be drawn into too many card situations, but he’s also physical enough to defend and even dispossess some of the best MLS offensive players when he has support.  If anything, I’d say Boswell is weakest in one-on-one situations.  He isn’t slow by any means, as he has incredibly devious sprint speed to catch up to or stay with a few of the quicker forwards when necessary.  Even still, as in the last 3 seasons with the Dynamo, he will once again be called upon to anchor a defensive unit which I believe should return to top 5 form this season after what can only be described as a miserable defensive season in 2010 – at least by Houston Dynamo terms.

Chabala played his way through the ranks in the Reserves Squad from 2006-2008, and in 2009 won the starting left back role.  He is another heady player who in my opinion has plenty of talent.  His pace isn’t superb, but it is pretty good as a left back.  As a left back in the Dynamo system, he regularly finds himself up on the wing on offense and has been known to send in a picture perfect cross into the box from time to time.  Even at 26, I still see Chabala as having a little room for growth, and while he isn’t one of the best Dynamo defenders at one-on-one situations he has proven he can handle them when needed.

The 26 year old defender has experience abroad, having played for IK Start in the Norwegian Premier League.  A shorter defensive back by most measures, he still manages to play strong on the ball, and has one of the better tackles on the team.  He comes to the Dynamo looking to find a place to start, but will hard-pressed to push Hainault or Chabala for time.  Even still, he’ll find time on the pitch, and I believe his skills on the ball and tackling will earn him a regular substitution role.

Acquiring Jordan in the offseason, the Dynamo added solid depth and talented youth to what was at the time a very aged line.  Even though he will most assuredly not play as a starter, his youth and talent will yield him playing time and hopefully help turn him into a regular starter within the next two seasons.  Just like Hunter, Jordan will be vying for time at outside back in the mix with Chabala and Hainault.  He is fairly lanky, and honestly his style of play reminds me of Ricardo Clark’s.  Though, due to the current roster utilization, I don’t expect to see Graye moving into a CDM role.  I think he could excel there, but that’s only my personal opinion.

Hainault has proven he is a more than capable wing-back for the Dynamo, and looks to improve upon a decidedly poor showing defensively last season.  The red-headed Canadian international is talented, fairly young, and not to mention tough.  He has the strength to dispossess most wingers in MLS, and he has solid pace.  The biggest knock I have on Hainault is his inability to press into the attack more than he does.  He is timid on offense unless given the right situations, though he’s a defender for a reason, but he has a truly remarkable cross into the box when he is given the space and opportunity to push the attack properly.  Hainault has improved leaps and bounds in just his first two seasons, and has become a mainstay in my mind akin to Bobby Boswell.  Yet, he’ll be pushed heavily by the even younger Freeman and Graye, and I expect enough rest in the latter stages of matches for Hainault, especially when the Dynamo find themselves ahead.

The old geezer of the bunch, E Rob is coming off a major surgery prior to last season which limited his play on the pitch.  While he showed some of the toughness and tenacity the Dynamo faithful have come to respect, he was clearly not the same player.  All signs point to a revitalized Robinson who looks to make his mark in the center of the defense in spot starts rotating with Jermaine Taylor and Boswell when necessary.  Honestly, Robinson while being a definite inspiration emotionally for the team is a bit of a liability when it comes to just how physical he really plays.  Something tells me he is in the last season of his career in MLS, and he will do everything he can to find time on the pitch.

Sarkodie is going to find time on the backline as a substitute or in the reserve league as a starter.  His youth means he is very raw, but even still his talent well covers for it.  He enjoys pressing forward on the attack, and I think he fits in best as an outside back.  Being only 19, he will see very limited time on the pitch – at least in my opinion – but I believe he will make his mark this season on a couple of occasions.  The way he plays reminds me of a midfield defender as opposed to a true defender.  In my opinion he is the CDM of the future for the Dynamo once Palmer rides off into the sunset.  I feel he could benefit from time in other positions beyond just defense, though believe me when I say he does not have a finishing touch.  He is clearly talented, as his time on the US U-17 squad and US U-20 squad would dictate.  Give him three years and he will begin a true surge into the spotlight.

If you had told me at the beginning of the off-season we’d have signed Taylor, I’d have laughed.  I honestly feel he has a boatload of talent and has been mistakenly overlooked by some of teams in more prestigious leagues.  Even still, their loss is our gain as they say.  He will be the second anchor to the Dynamo center defense, playing alongside the stalwart Bobby Boswell.  The two are already growing comfortable playing alongside one another, and are ready to prove the Dynamo defense last season was a fluke.  While not being incredibly tall, he has excellent pace and incredibly strong tackling both standing and sliding.  He isn’t incredibly physical, ala E Rob, but he can knock a guy off the ball when necessary.  His biggest flaw is his discomfort on set pieces, something the Dynamo covet.

The Dynamo will look to improve upon one of the leakiest back line showings in recent memory.  The four I expect to start at the beginning of the season are Hainault, Boswell, Taylor, and Chabala (though I think Freeman might push Chabala enough).  As we near the summer months, and the roughest part of being in Houston, Dom will interchange many of the players to keep everyone fresh, a luxury he hasn’t had in recent seasons.  A fresh Dynamo backline will mean a more solid season, and as I’ve said before I have every reason to believe they can return to top 5 form.

I’m interested to hear your thoughts, especially on the reserves and substitutes the Dynamo have on the roster.