Where Will Koke Fit in to the Dynamo Lineup

Share All sharing options for: Where Will Koke Fit in to the Dynamo Lineup

I've been spending far too much time over the past couple days learning everything I can about new Dynamo signing Sergio Koke. Inevitably, the first question that pops in to my head is where Koke would best fit in to Dominic Kinnear's lineup.

Koke has played in both a forward and central midfield role and he's been in the CAM position at Aris the last couple years. This of course leads to a simple question, does Koke play up front or does he supplant Geoff Cameron?

Before we get in to any of this, I should mention that Koke is listed on the Dynamo roster as a forward, so take that how you will.

Taking out of the equation Cameron's improving play and desire to be in an attacking role, the easy option seems to shifting Cameron back to the defense and putting Koke in the central attacking role...but things are never that simple. There are only so many spots on the field and so many minutes that can be played, so inevitably, someone is going to lose playing time somewhere. While it's coaches job to keep his players happy and motivated, the primary goal is to win and that means putting the best team on the field in every match.

If Kinnear is determined to stick with his patented 4-4-2 diamond, with Koke in the CAM role, either Andre Hainault or Jermaine Taylor will be riding the bench in order to keep Geoff Cameron on the field. However, there's another option to consider but it's a little tricky.

Logic would tell you that if you have multiple good options in the midfield, then why not tinker with your formation to get both Koke and Cameron on the field in attacking roles? Of course all this is mute if Koke is fine with going back to a traditional striker role, but if he'd rather stay as the CAM then why not toy with a 4-5-1 or 4-3-3?

The reason I say this idea is tricky because Kinnear loves the 4-4-2 and that while we've seen variations on it during matches if a situation called for it (holding a lead or chasing a goal), when is the last time you can remember the Dynamo starting a match in anything other than the 4-4-2?

Basically, there's a reason I'm not a soccer coach.

Assuming Houston will stick with the 4-4-2, these are the two most likely lineups we'll see: 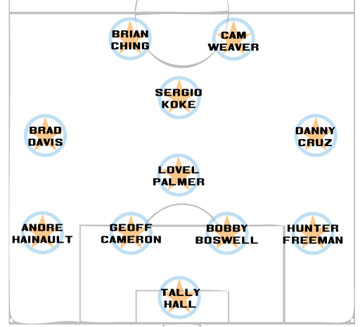 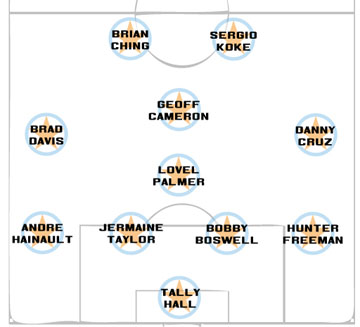 But what if Kinnear wants to keep Cameron and Koke in the midfield? Why not experiment with a 4-1-4-1 formation that allows you to take advantage of the midfield depth on the roster? 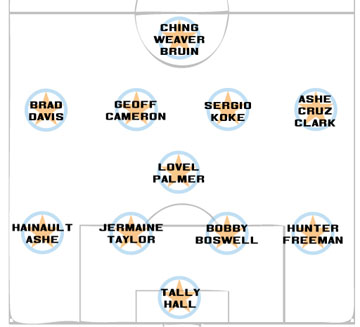 Clearly there is a plan because the Dynamo are going to bring in a player like Koke without knowing exactly where they want him to play and knowing exactly what kind of adjustment will need to be made. Until we see the team on the field playing, we'll just have to speculate...but in a situation like this, with an exciting new attacking player under contract, speculating is fun.