Monday Morning Centre Back: Freeman's Goal Was Not a Handball...Technically

Share All sharing options for: Monday Morning Centre Back: Freeman's Goal Was Not a Handball...Technically

FIFA rules of the game state that is illegal if a player "handles the ball deliberately (except for the goalkeeper within his own penalty area)".

Further broken down, there are two types of situations in which the ball touches a players hand or arm, one of which is a foul, the other which is not. In the end, it's the referee's discretion as to what type of violation occur and if it punishable by a foul, card, free kick and/or penalty.

Ball To Hand (no foul)

So where does Hunter Freeman's controversial goal from last night fit in to FIFA rules? Who the heck knows...but I think I have a good idea of what happened.

It's clear the ball deflected off Freeman's hand and in to the New England goal. However, his hand was in a natural position (based on the contact) and he made no apparent swinging motion or obvious attempt with his hand or arm to affect the path of the ball...and that's my evaluation at full speed.

Slow things down and I think I can prove that not only was it not a handball under the rules, it could have just as easily been a penalty to Houston. 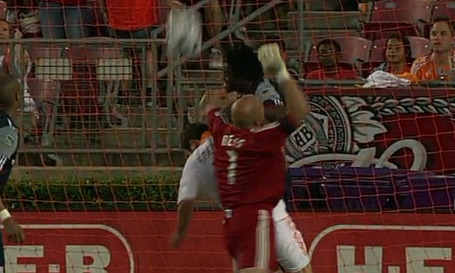 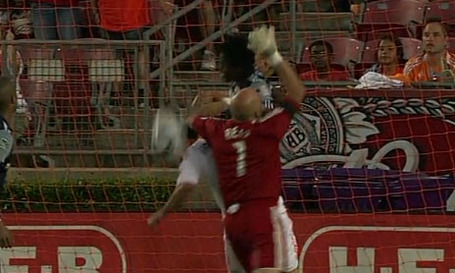 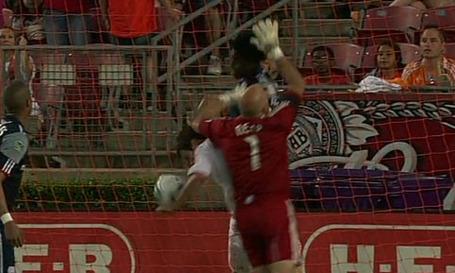 Take a real close look at what was happening. By the time the ball contacted Freeman's hand, his head was being forced down by Matt Reis' arms and elbow. Thus, he could not have seen the ball coming down and wouldn't have been able to either intentionally make contact or remove his arm from the path of the ball. If anything, it could have been called a penalty on Reis since Freeman established the position, had the right to be there and was fouled by not only Reis but Kenny Mansally during the play.

Thus, it's a good goal. Sorry New England, but for once, the referee got it right.

Absolute worst case it's a ball to hand incident and therefore not a foul that should be whistled by the referee. Sure, it went in off his hand but he didn't pull a Diego Maradona and direct his hand to the ball. Freeman was being pushed down and the natural reaction is to put out your arms to attempt to keep your balance. It wasn't an intentional attempt to push the ball in the goal, it was caused by a foul from the Revolution players.

I'll freely admit that the only thing we'll be able to get everyone to agree on is that it was a near impossible split second decision for the referee...though I'm sure Revolution fans will feel differently.

It wasn't the prettiest of three point for the Dynamo, but after last season we deserve a few breaks.