Lack of Offense Cost Dynamo in 2-0 Loss to San Jose, Prepare For Avalanche of Clichéd Excuses

Share All sharing options for: Lack of Offense Cost Dynamo in 2-0 Loss to San Jose, Prepare For Avalanche of Clichéd Excuses

Stop me if you've heard this before...the Houston Dynamo have no creativity in the midfield and forwards that simply cannot consistently finish chances. I've said that, or something similar, far too many times this season but the sad fact is that game in, game out it's the truth for Houston. It's not like they aren't getting chances on goal, they just can't do anything with them. It's insanely frustrating and I'm getting tired of writing about it.

So it was at Buck Shaw Stadium on Saturday night that the Dynamo once again wasted their chances and fell victim to more pathetic officiating as they lost 2-0 to the San Jose Earthquakes. It was a tale of two halves for sure, the first dominated by Houston, the second dominated by San Jose and since the USSF can't find any human being with a usable set of eyes and even the smallest amount of mental intelligence to referee MLS matches, San Jose was able to take advantage of their chances after Houston spent the first half wasting theirs. 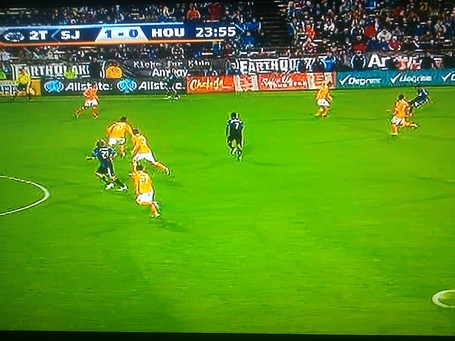 As you can see above, Lenhart was roughly half a body-length ahead of Hunter Freeman and the f**cking muppet linesman was several yards out of position and thus had the wrong angle on the play. How many different ways can USSF officials screw up MLS matches before something is done? It's not a chronic problem anymore, it's a complete lack of competency and training as Sunil Gulati and all his USSF cronies are too busy kissing Sepp Blatter's ass and setting up money grab friendlies rather than actually doing anything to support and grow the f**cking sport in this country.

Please understand I'm not blaming the loss on the blown offsides call, the Dynamo got completely outplayed in the second half, but that doesn't excuse it either.

Matt Lenhart's header was a great goal, but he was offsides and given the amount of standing water on the pitch and the amount of time Lenhart spent flopping around, you'd think he was watching Carlos Ruiz highlights all week to prepare for tonight.

There's probably more to say, like praising Geoff Cameron who was back in the central defense, but I don't feel like it and don't care. This season is quickly going down the toilet as the Dynamo are now seven matches without a victory. If a true central attacking midfielder and a consistent goal-scoring forward is not brought in during the summer transfer window, it's going to be a lot of the same useless nonsense and a long hot summer.

Maybe by Monday I'll feel like offering some better analysis, but don't count on it. I think I'll just spew some generic clichéd nonsense about "getting three points next week" or "getting back to work in practice". Since that's all we seem to be getting and it's only right that I produce the same shit all week.

It's time for the Dynamo to stop saying all the "right" things and actual translate it to on the field results. I mean, it's f**cking June and I'm already have to discuss how missing the playoffs for the second straight season is completely unacceptable...because it is...and the way the Dynamo are playing, they will.