Number Never Lie, Except When You're Being Propped Up By the Eastern Conference

Share All sharing options for: Number Never Lie, Except When You're Being Propped Up By the Eastern Conference

You can't judge a season by 14 games, but you can compare it to where you stood the previous season after the same number of matches. When you compare the first 14 matches in 2010 to the first 14 in 2011, you get a mixed bags of data that a requires a couple looks to fully digest...and possibly an antacid as well. 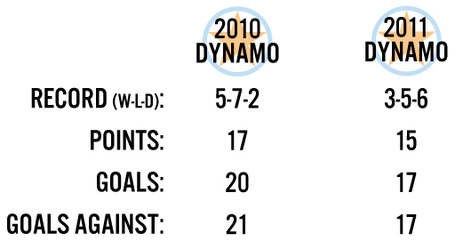 At this point in the 2010 season the Dynamo had more wins, more points and had scored more goals than the 2011 version of the team. The only stat that favors this season is goals against, where the Dynamo have allowed four fewer goals. At first glance, this feels like a negative, but is that really the case?

It really depends on what you value as the most important statistic above. Since points determine playoff qualification, I rate points the highest and it's pretty black and white between this season and last. The advantage the Dynamo have though is that unlike last season, they are in the Eastern Conference and instead of being in 8th place in the West, they sit 4th in the East.

So if I understand myself correctly, the Dynamo are having a worse season (in terms of overall results) than 2010, but thanks to the Eastern Conference, it looks like a better season? This is starting to feel like one of those proverbial "putting lipstick on a pig" situations. Basically, the Dynamo poor start to the season is being partially forgiven thanks to Don Garber's pointless obsession with conference championship games. You've have to take the advantages whenever you can get them I guess.

The Dynamo didn't make the playoffs last year and if the season ended today, they wouldn't be making them again this season. Points don't tell the whole story though, even if they are the most important number when it comes to determining the success or failure of a season, which of course is making the playoffs.

I'm getting a headache. 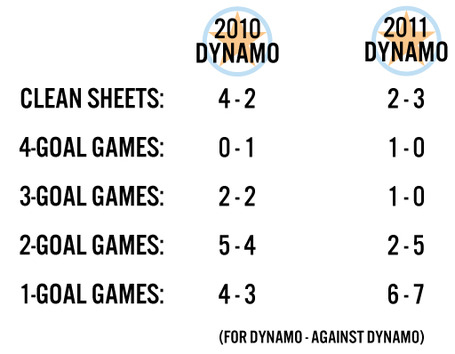 As you can see from the stats above, while the offense hasn't been as effective this season, the defense has improved. No team has scored more than two goals in one game, where as last season the Dynamo had already given up three goals on two occasions.

So what does all this really mean? This is a rebuilding team, in the middle of the process, but it's a team that thanks to the change of conferences, is not already on the verge of being eliminated from playoff contention. It's completely reasonable to believe that a healthy Brian Ching could have made up the goal difference between this season and last. More importantly, a creative center mid signing in the summer transfer window could help push the offense from showing potential, to actually generating goals.

Yet despite those facts, this season almost feel worse than last season and that probably has more to do with the lack of early season wins that last year help create a false hope about what that roster was capable of accomplishing. I think it's fair to say that the 2011 Dynamo are a better team, but injuries and other factors have so far contributed to it feeling like a worse team than it really is. I think it's also fair to say that all the issues that ultimately sank the 2010 season are not completely resolved.

We'll have to re-visit these statistics in another 14 matches.