Share All sharing options for: Orange fireworks locked and loaded? 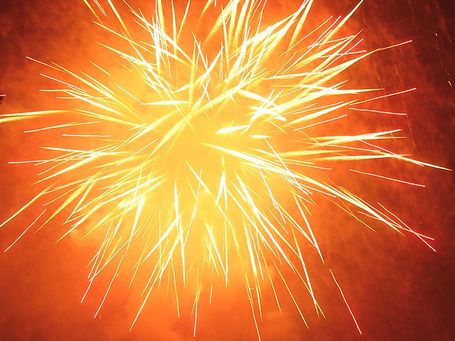 It's Friday going into the Fourth of July weekend and it's time for a few orange fireworks.

Dynamo head to Colorado on Sunday to take on the defending MLS champ Colorado Crapids. (I'm sorry. No matter how many times I say, read or write that, I just cannot believe it. Oh well, thanks to George John, at least I'm not applying that label to Frisco!! }shudder{)

Here are the Dynamo's game notes, released yesterday with my comments about same.

Houston plays its second consecutive road game this week, taking on the defending MLS Cup champion Colorado Rapids on Fourth of July weekend. After drawing with D.C. United last week, Houston has earned a tie in five of eight road games but is still looking for its first road win of the season. The Dynamo are 8-5-3 in the all-time series against the Rapids (including the 2006 Western Conference final) and are 3-4-1 all-time in Colorado, although their last road win in the series came in October 2008.

Colorado, of course, just got absolutely sheeee-lacked 4-1 in Columbus in the twice-annual Col v Col tilt.

Here's the vid in case you missed it:

One thing to notice is how Conor Casey almost deprived Will Hesmer of his ever-so-handsome face.

And for that, he will be sitting out this weekend barbecuing with his family and (should he have them) friends. I guess I shouldn't go after Mr. Clean like that. When they were here last year, Casey was being his usual overly aggressive self, this time at Mike Chabala, prompting this season-ticket holder to blurt out a few things that would have gotten me expelled from Nordecke, The Fort and possibly even Frisco ISD's own Pizza Hut Park. In the midst of this, I yelled to the AR, "How many times is Casey going to to get with hammering Chabala like that!!" (or words to that effect.) Casey heard me and as he was walking away held up two fingers (not, not THAT kind of two-fingered salute), and called out "Two more times." I didn't stop laughing for five minutes.

Speaking of having the Fourth of July weekend off, the most recent injury report, as of Tuesday, June 28:

I have yet to see a more recent injury report, so I'm going with this one. Davis has had injury problems in the groinal area before that has seen him miss time, so I assume great attention will be paid to this. He has been the Dynamo MVP this season, IMHO, so no messing around with false bravado.
Dynamo Notes:

In 19 career regular-season games against Colorado, Houston forward Brian Ching has netted 13 goals, including his four-goal outing in the Dynamo's first game ever in 2006. In those 19 games, Ching has averaged 1.25 goals per 90 minutes played, and five goals have been game-winners. Last week's game against D.C. United was Ching's first 90-minute outing of the season, and he scored his first goal of the season in the 89th minute to tie the match.

This would be a great time for the Flyin' Hawaiian to establish himself, making sure that the second half of the season will not resemble the first.

How about that? An encouraging stat. Team Opta boys are good for something.

In last Saturday's game against D.C. United, midfielder Colin Clark came on as a halftime substitute and set up the tying goal in the 89th minute with a cross to Brian Ching. For Clark, the assist was his first in a Dynamo uniform and his first since April 30, 2009, when he played for this week's opponent, Colorado.

How great would it be to see Clark come out flying against his former team? He has shown some moments of quality this season, just not consistently. Still, as the Fab Four said, it's getting better all the time.

The Dynamo twice rallied from a one-goal deficit to tie last Saturday's game against D.C. United, and Houston currently ranks third in MLS in winning percentage when conceding the first goal (1-5-5, .318). However, Houston has only scored first in five of 17 games this season, going 3-1-1 when scoring first.

Ranks third with .318? From the top or bottom? Fun with stats.

Three of the starters in last week's game - midfielder Je-Vaughn Watson and defendersKofi Sarkodie and Jermaine Taylor - had not played since May 28 and have made fewer than five starts on the season. For Watson, the start was his fourth, and he set up his third goal in those four starts by feeding Brian Ching in the penalty area, where Ching was fouled to set up a penalty kick.

Especially nice to see HRH Kofi turning in what could be a confidence-builder in RFK. This is going to be especially crucial if Freeman continues to play somewhat below expectations and/or we use our centerback glut to go wheeling and dealing.

Houston midfielder Brad Davis leads Major League Soccer with nine assists on the season and is three assists away from tying his career high of 12, a total he reached in both 2009 and 2010. Davis has been named to the MLSsoccer.com Team of the Week five times, more than any other player.

Forward Will Bruin has set Dynamo rookie records by appearing in 17 games, passing Stuart Holden
(13 in 2006), and making 16 starts, passing Geoff Cameron (8 in 2008). Bruin also ranks third in MLS in shots on goal with 19 and in total shots with 43

Taylor Twellman was in an interview on World Football Daily a few weeks ago and credited Paul Mariner with turning him into the goal-scoring machine he was. He said Mariner's advice come down to this: "You can;t score if you don't put your shots on frame." The Dancing Bear, meanwhile, in a nice interview on WFD last week, told host Kenny Hassan that Dominic Kinnear had said the exact same words to him. Well, come on rookie. It's nice to see you firing away, but you have four goals (three in one game). That's an .093 success rate of goals to shots and .211 of goals to shots on goal. The Ghanian who shall not be named went to Chicago. Don't be the ursine version of same. No one wants that.

Six Dynamo players were nominated to the fan ballot for the 2011 MLS All-Star Game, which will be held in Harrison, N.J., on July 27. A media panel selected six players from each team to be on the ballot, and the Dynamo are represented by: goalkeeper Tally Hall, defender Bobby Boswell, midfielders Geoff Cameron and Brad Davis, and forwards Will Bruin and Cam Weaver

The Dynamo lead Major League Soccer in goals scored in the final 15 minutes of a half, having struck for 13 goals in minutes 31-45 and 76-90, one ahead of the LA Galaxy and FC Dallas. Houston has seven goals from minutes 76-90, second only to Seattle, and six from minutes 31-45, trailing LA and New York with seven. Highlighting the late goals have been Hunter Freeman's game-winner (April 17) and game-tying goals from Bobby Boswell, Colin Clark, and Brian Ching on April 23, May 28, and June 25, respectively.

After getting hammerred that way so often and so painfully last season, this is a nice thing to see. But look at that scoring first stat a few paragraphs above and you'll see that we seem to have traded one for the other. Not good. You're Texans now boys. To paraphrase the husband of the great Lady Bird Johnson, Score early, Score often.