When Can a Potential Hurricane Lighten the Mood?

Share All sharing options for: When Can a Potential Hurricane Lighten the Mood?

Answer: It can't. Not really.

But in an attempt to lighten the mood against what many on here seem to see as an almost certain loss to the hated Seattle Sounders on Saturday, let's see if Tropical Storm/Hurricane Don can delay matters somewhat. Them Seattles may have rain for 330 (or more) out of every 365 days per year, but they come down here and we'll show them what a Gulf Coast rainstorm can do!

And while we're on the topic of matters somewhat away from Robertson Stadium, Playtherapy forwarded to me the following link about a nice, new development in the FIFA thing that could indeed impact us if that 2022 World Cup decision ever gets a revote. 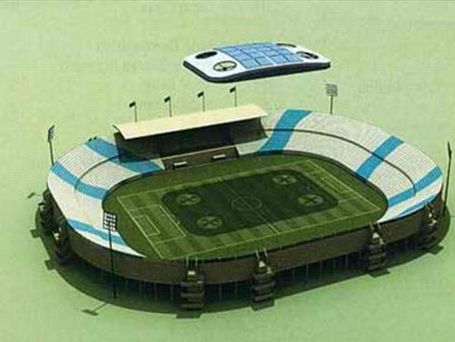 What could possibly go wrong?!?!?

Anyway, the link is at http://www.guardian.co.uk/football/2011/jul/26/europe-top-clubs-fifa-revolt

I think this is great. These are pretty direct observations from Rumenigge and I hope there's a huge kerfuffle over this. Everything on this whole FIFA deal seems set up to either let things lay or have them continue with the Qatari World Cup an eventual sacrificial lamb. With Mohammed Bin Hamman being banned for life, it could end right there. But with these kind of comments from the head of Bayern Munich, no less, doubling as the head of the ECA, further "discovery" of bribery and corruption could just make those guys wish they could have a Hurricane of their own. What do you think?

And here's the full story if you'd prefer to read it here.

Karl-Heinz Rummenigge, the chairman of the European Club Association (ECA), has called for a club-led "revolution" against the "corrupt people" who govern football and called for his members to have a say in Fifa's decision-making process.

The 55-year-old chief executive officer of Bayern Munich said he despaired at what he described as the "daily corruption process at Fifa" and asked the footballing authorities "to recognise that it's time for democracy, transparency and the right balance in the football family".

"I don't accept any longer that we [should be] guided by people who are not serious and clean," he said. "Now is the moment to intervene. Because knowing something is wrong is an obligation to change."

The ECA replaced G14 as the representative body for the leading European clubs and numbers among its members Manchester United, Chelsea, Arsenal and Liverpool. Rummenigge said there was a groundswell of public support for his stance in the wake of recent scandals, the life-ban for Mohamed bin Hammam and "questions about the Qatari World Cup".

"It's not just the top clubs, it's all the clubs," he said, adding that the feeling of discontent was felt strongest in Germany, Switzerland and England, where he has recently met the sports minister, Hugh Robertson, and club officials.

Fifa itself was unable to change, he said. "Sepp Blatter is saying [that he's cleaning up shop] but the fact that no one believes him tells you everything you need to know. I'm not optimistic because they believe the system is working perfectly as it is. It's a machine, World Cup after World Cup. And for them, that's more important than serious and clean governance."

There was also, in his opinion, little chance that the national associations would exert pressure for reforms. "I don't believe [that they will get involved]. The current system is tailor-made for the associations and voted for by the associations. They won't go against [Fifa]." Having a representative of the clubs on Fifa's executive committee was not enough, he said. "I would go further. All stakeholders? clubs, associations, players, referees, and women's football ? have a right to be involved in the decision-making process."

Rummenigge also professed himself unhappy with the amount of international games clogging up the fixture calendar. "When I won the European Championship [in 1980], there were eight teams in the finals. That figure will treble by 2016. In the World Cup, it used to be 16 teams, now it's 32. The clubs pay the players but are not part of the decision-making process.We are not treated respectfully."

Rummenigge hinted at a possible breakaway from international associations if the ECA's grievances over fixture congestion are not addressed. "I will give them a chance but I'm ready for a revolution if that's the only way to come to a solution," he said.