Share All sharing options for: MLS Teams Forced to Play Against Opponents and Referees in CONCACAF Champions League

Tuesday's CONCACAF Champions League match between the LA Galaxy and Monarcas Morelia was yet another example of the diabolical state of officiating in this tournament and from CONCACAF referees in general. Multiple replay angles proved without a shadow of a doubt that Robbie Keane was onside when the ball was headed forward toward the Morelia goal and it wasn't even close. 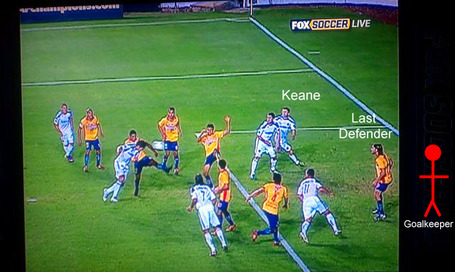 I wish there was a view of the linesman's positioning on the call but I wouldn't be surprised is he had begun a move up-field thinking the ball was being cleared and got himself out of position as the ball was quickly sent back towards the goalkeeper. Whatever the reason, it was a botched call that cost the Galaxy at least one point and possibly all three from the match. 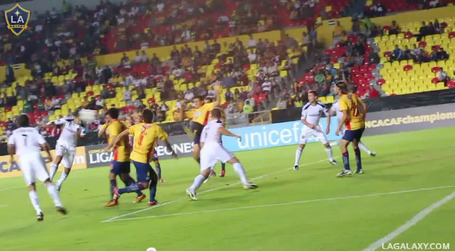 In the end it doesn't matter since protesting the game won't do any good, so Galaxy and MLS fans are left to swallow yet another bitter pill and "accept" that this is just how things will be in the CONCACAF Champions League. This idea is absurd, but what else are we supposed to do? CONCACAF doesn't care clearly since the idiots in charge of that clown college are too busy counting their money instead of actually trying to improve the state of the game in their region. Meanwhile FIFA refuses to move forward on any kind of video replay technology, a simple system that might have allowed for grossly incorrect decision like the one we witnessed last night to be reversed.

Paulson's statement echos the feelings of a great number of fans and I would expect team executives as well. I appreciate Paulson saying something publicly about the incident because no one is listening to fans and the media since we've been railing against the pathetic state of CONCACAF officiating for quite awhile now.

Of course, the CONCACAF crew on Wednesday night's FC Dallas v Tauro's match was not to be outdone either by the idiots on Tuesday. Check out this play which was also ruled offsides: 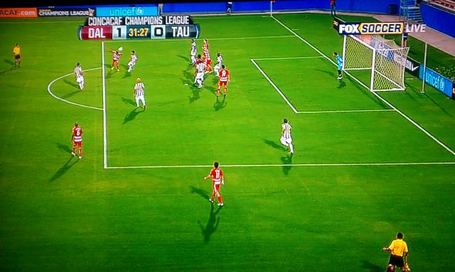 I suppose all we can do it to keep pointing out every instance of obvious mistakes by the referees and wait for the day the governing bodies in charge of football finally decide to do something about the problems. How long that takes is anyone's guess, but given FIFA and CONCACAF's ability to stick their heads in the sand, I doubt anything will change soon.