Big D (as in Dynamo) in little F

Share All sharing options for: Big D (as in Dynamo) in little F

At 3 p.m. Saturday afternoon, Sept. 24, the temperature in Frisco, Texas is predicted to be 91 degrees. The National Weather Service says it's going to be sunny with 0% chance of rain. Really, a pleasant day on the South Oklahoma plains for any visitors who happen to have the misfortune of actually showing up in Frisco tomorrow.

For Frisco residents, however, or rather, for 18 of those residents in particular, the plan is to turn the day into an actual living hell.

The Frisco ISD Home XI (actually, by the time it happened, X), had the perhaps mistaken impression that ConcaChampions League games only go 82 minutes in Texas. UNAM Pumas, on the other hand, managed to grab a copy of the FIFA Laws of the Game booklet beforehand (you know how it is with those UNAM students, always studying), and found that, yes indeed 90-plus minutes are required in a regulation game of association football. Armed with this knowledge, Pumas then proceeded to score in the 83rd and 90th minutes to win the game and embarrass the local Candystripers. (Perhaps they were inspired by this video. Eureka!)

For our Houston Dynamo, who plan to make the trip up to Robertson North for a 3 p.m. kick off Saturday, UNAM's late beat down of the South Okies can perhaps be something of a lesson. Dynamo will officially be playing to take re-possession of the El Capitan cannon, which goes to the team with the best record over the other annually. Apparently, if the two were to meet in the playoffs, those records will go into account, so possession may or may not be ultimately determined Saturday. According to the Dynamo's game notes:

Houston and Dallas compete each season for El Capitán, a Civil War-era mountain howitzer. The teams tied 2-2 in May, so the winner of Saturday’s game will hold the cannon next year. If the match is a tie and the teams do not meet in the postseason, Dallas will retain the cannon as the defending holder. Houston has won the season series in three of five seasons.

I remember the first time Dynamo lost this thing on, of all things, away goals in 2008. (Wiki entry on the derby here.) I was pissed off, and not because of the cannon, (I mean, really, does this cannon actually exist? Has anyone ever actually seen this thing? Link to a picture in the comments if you have one, and shut me up on this.), but because I can conceive of no circumstance in any reality where a Houston team should lose to one from up there for any reason whatsoever. I'm not saying that, as a fifth-generation Houstonian, I dislike Dallas and environs. I'm saying that I despise that place with every fiber of my being. OK? In all of Houston's 175 years of existence, every US President that has ever visited here has left in somewhat the same condition in which he arrived, that is, alive. Over to you, Dallas. 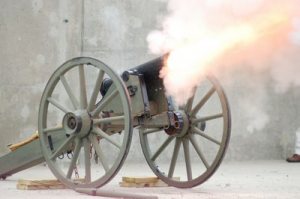 Where was I? The weather, FCD's midweek humiliation, association football, firing cannons at Dallas, oh yeah! Saturday. Here's a quickie preview rundown released from the Dynamo yesterday:Dynamo at FC Dallas

The Dynamo return to the road on Saturday to take on in-state rival FC Dallas in the teams' second and final regular season meeting. El Capitán, the Civil War-era mountain howitzer awarded to the winner of the season series, remains up for grabs after the teams played to a 2-2 tie in Houston on May 28. If the teams tie again and do not meet in the postseason, FC Dallas will retain the cannon. Houston leads the all-time series 9-4-7 in all competitions.

· Although the Dynamo have controlled the all-time series, Houston has not beaten Dallas in their last four competitive meetings (0-2-2), dating back to a 3-1 Dynamo win on June 13, 2009, one of two Houston road wins in the all-time series. The other came almost four years ago, on September 30, 2007.

· The Dynamo’s 79th-minute goal last Saturday was the ninth time this season Houston has scored in the final 11 minutes of a match to win or tie a game, including five road ties. The goal was the first since April 29 for rookie forward Will Bruin and made him the highest scorer among MLS rookies.

· Despite coming off the bench as a substitute, midfielder Danny Cruz has assisted on dramatic goals in consecutive games, starting the plays that led to Calen Carr’s goal against Columbus and Will Bruin’s tally against San Jose. Cruz now has three assists on the season, a career high and tied for the third-highest total on the team.

June 13, 2009. I remember it well. The huge expanses of empty red seats, the vast majority of fans in the stands in orange. Ah heck, take a look yourself:

Back to the present moment, Brian Ching is back to full health this week, and Adam Moffat, despite appearing on the injured list, trained with the team Thursday (according to Jose de Jesus Ortiz' Twitter feed) and will be out there training some more today. (Ortiz' defense of Rafa Marquez is amazing to me. But then again, any defense of Marquez is amazing to me. That's just me I guess.) So really, the only injury absence for Dynamo is Alex Dixon.

Here's the full injury report for both teams: 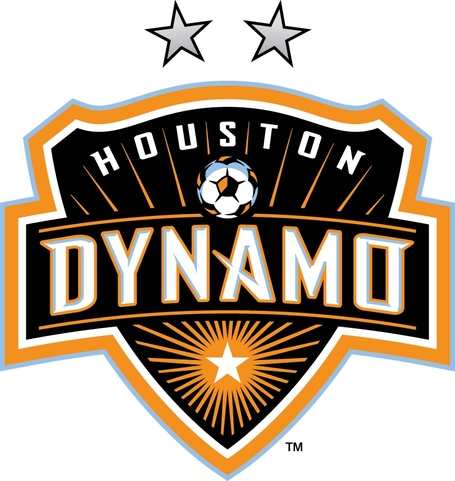 No real shockers there, and no suspensions either. I'm hoping to see this lineup in Orange:

However, bowing to Moffat's potential absence (you just don't mess with concussions), I wouldn't be at all surprised to see this:

And in this situation, I would hope that Cameron is in the defensive midfielder role while Camargo stays putski at CAM.

As for topside, people might well ask just why I've got Carlo Costly sitting. To which I reply just what have we seen from him in games thus far that would justify him starting? He's been solid at best, invisible at worst, but in no way has he been anything special. Now, that being said, I hope he gets significant minutes at Robertson North, and considering the fact that both Bruin and Ching are back from injury, it's not unreasonable to have him in the starting XI. And who knows, this might just be the game he explodes, as anyone who's ever seen him play for Honduras knows he's capable of doing. When he scores, he scores in bunches, and I can think of no better game to get that started.

Predicting the game is where this all gets a little muddy. The sad fact of the matter is that Dynamo have not won on the road all season. This is just truth. Also, Frisco is a good team, and a 2010 MLS Cup finalist (You lost to Colorado!! HAHAHAHAHA!!! Apparently, someone at Blackburn finally unearthed a copy of that game at the last minute, saw the oggie, and George John was on the next flight back to the states posthaste.) , bad run of recent form notwithstanding. There are many reasons why Dynamo faithful can feel optimistic. Frisco has not won since a 2-1 home result over Tigres in a friendly Sept. 3. Apart from that meaningless game, the Candystripers have are 0-3-1 in all competitions since a 3-2 win at Sporting KC Aug. 27, getting outscored 7-1 over that time. However, in an attempt to create something resembling an atmosphere get this (from the FCD website. Oh, the places I travel online for you, DT's lotal readers):

WinStar World Casino presents the second leg of the 2011 Texas Derby and will be giving away free vuvuzelas to the first 5,000 fans at the game. The Team Store will be selling FC Dallas authentic and replica jerseys for 40% off.

5,000 Vuvuzelas? I wonder what they'll do with all of the leftovers? >BA-dump-bump.< Actually, I know all about FCD's impressive increase in ticket sales this year, up as they are 2,300 per game over last year, while Dynamo have been more or less holding steady, down just 500 per game from a year in which we packaged together the 2010 MLS All-Star Game. (Full numbers here. Fun fact: the Sounders are outdrawing the Mariners this season.) Frisco is averaging 13,171 per game this season, while Dynamo is averaging 16,882 in Robertson's final year. And of course, our average is likely to go up as we still have the Galaxy game not yet counted, while the PHP average will probably go down with home games remaining only against Toronto and Vancouver. Still, increases aside, 16,882 > 13,171, and I didn't need to consult with my son's math teacher to confirm that.

Prediction: Brain says: 1-1. Heart says: 14-0. Until Dynamo actually win on the road, I cannot predict them to win on the road. Dallas' run of form aside, we lost to Vancouver in Canuckistan. So let's get real. So getting back that (mythical?) cannon will have to wait until we upset those guys, embarrassing them utterly by bumping them from the playoffs (again). Which of course, reminds me of this, best night in Robertson Stadium. Ever.