Judging by the general content of the comments around here (and in other places), the main concern going into the 2012 Houston Dynamo season is that team has dipped in quality with the loss of Brian Ching and Danny Cruz. The fear seems to be that we are in for yet another long season of middling to above average results with the possibility of a serious drop in form. Or do I exaggerate?

Neither Jose de Jesus Ortiz nor Glenn Davis have much to say so far today about potential player transfers. However, adding potential fuel to the fire of perhaps some supporter discontent is a pair of stories filtering from points south. The first one (link here) says that that CD Olimpia have decided not to deal Oscar Boniek Garcia, despite entreaties from his family and apparent contact from our Orange. It's hard to say whether or not this is just another negotiating ploy as this wouldn't be the first time we've seen stories like this in the middle of negotiations, but still, it's pretty far from encouraging.

A second story from Honduran paper Diez.hn (link here, which unfortunately is in Spanish) states that Carlo Costly is at Real España, but would prefer to play abroad. It then goes to say that España has received offers for Costly's services from Deportivo Cali in Colombia, some team in China and, you guessed it, the Houston Dynamo. So the question is, is it possible that we can see more from Costly over an entire season than we saw in the second half of last year. In a forward corps of Will Bruin, Cam Weaver, Calen Carr and Chris Rolfe (not to mention possibly a trialist), would Costly fit in? Would he get minutes? Would he be a distraction? 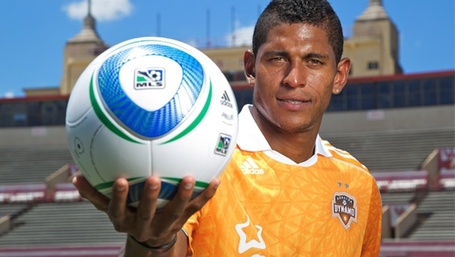 I'm of two minds about Costly. One, Dynamo's ascension in 2011 coincides with his time at the club, though the same is true of both Adam Moffat and Luiz Camargo, and I would definitely heap far, far more credit onto the latter two than the first one. He was clearly a standup guy, and Captain Brad Davis has, among others, praised him effusively. Costly's experience and known skill might just be a nice mix in what is quite a green group after Weaver. What do you think?

And while we're gathering thoughts, check out this piece from everyone's favorite Ginger about whether or not USMNT fans sometimes lose the forest for the trees. With this piece, I could not agree more.

And on this rainy day, as I move on to this afternoon's juice fixtures of Liverpool/City, Napoli/Inter and Barca/Real Madrid get some work done from home, I leave you with this really quite compelling video offering some thoughts on how to improve TV coverage of soccer in the US. I don't agree with everything this guy has to say, but the general thrust is, I believe, right on. What do you think?