Share All sharing options for: The 2011 Creamsicles: ...and the Winners Are

Welcome to the 2011 Creamsicles: The Dynamo Theory Awards. 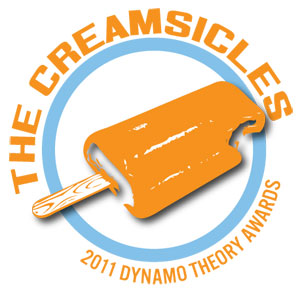 For the first time, Dynamo Theory will be honoring the best of the best from the 2011 Houston Dynamo season. Hopefully this becomes an annual extravaganza, but we'll have to see how things go this year first. We surveyed our readers and staff members to determine the winners and we'd like to first thank everyone for participating in the voting!

So, without further delay...the winners of the 2011 Creamsicles are...

Winners were determined by a combination of fan/reader voting and DT staff voting. 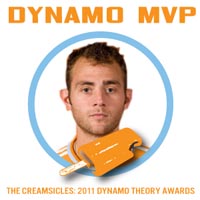 Ginge: Was there ever really any doubt? Not to discount the efforts of the other candidates but anyone who watched the Dynamo this season knew that Brad Davis was the MVP. The only people who didn't realize that were the knuckleheads who voted De Ro the league MVP. 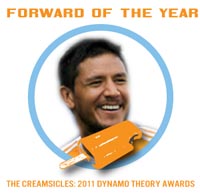 Martek: In a year when there was no real consistency from anyone in the forward position, the only one who you felt could change a game at any moment, who consistently drew the opposing defense's attention, was Captain Kamehameha. Since the competition was so sparse in this role, I'm giving it to Ching on bookending the Robertson Stadium Era by scoring the last goal in the place. 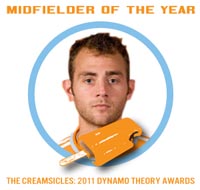 Fuzion: You can't be involved on as high a percentage of team goals as he was and NOT be considered for every category plausible 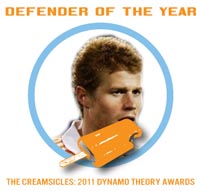 Ginge: The voting was close on this award all around, with plenty of good arguments for each candidate. Andre Hainault wins out though in my mind simply because he was was back there all season, playing wherever Kinnear needed him. The tipping point for me in the end? Club before country. 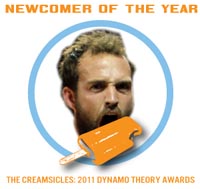 Fuzion: Moffatmania is alive and well in H-town 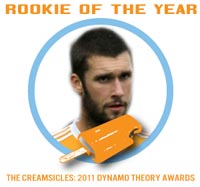 CiudadDeClutch: Would have loved to give it to Dixon, but injury kept him from contributing consistently at the end of the season. Bruin provides youth and strength to a forward line that needs him desperately. Looking forward to his improvement next season as he takes on a larger role with the team. 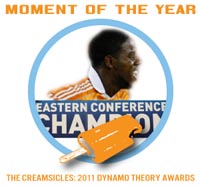 Moment of the Year: Tie - Dixon's Goal vs. RSL and Winning the Eastern Conference Championship (Readers: 44.5% for both - Staff: 50% for both)

Martek: For sheer exuberance and off the charts seismic "WOW!!!" factor, I'm giving this to Dixon. I mean, the stadium groundbreaking is more important for the long term, and the Eastern Final meant a trophy. Both are greater accomplishments and have longer term import. However, Dixon's goal. Holy crap. He did that right in front of me, and you should have seen the bend on that sucker when he fired it. Rimando had no chance. None at all. Years from now, when I'm taking my grandchildren to Dowling Street, I look forward to boring the hell out of them, complaining about the then-current crop of Dynamen, and telling the story of Dixon's last-second stunner. 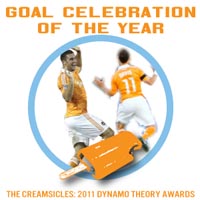 Ginge: Does it really get any better than two grown men doing the dancing bear after a goal? I think not. Don't get me wrong, I loved the raw passion after Dixon's goal against RSL, but for a pure moment of hilarity and one of the best images of the season, the dancing bear wins out. 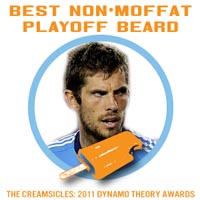 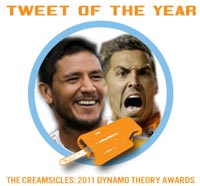 Ching's reaction to Bob Bradley getting fired ("Some days just put a smile on your face.")

Jason: Timely & caught me completely off guard. Loved it.

Cameron's reaction to Ching getting drafted by Montreal ("U wait all this time to be a head coach and the first thing u do is screw somebody over?? Sign of a real classy guy!")

CiudadDeClutch: I thoroughly enjoyed Ching's apparent joy in Bradley's departure, but see it as a more USMNT moment. Great to see Dynamo players sticking up for one-another, and providing some excellent story lines come 2012.