Anyone watching Saturday's 2-0 victory over the Revolution saw a dramatic switch in momentum in favor of the Dynamo. But, is momentum in sports real? And will that in-game momentum transfer over to Houston's remaining matches?

Using science to explain sports, in a lot of cases, is like fitting a square peg in a round hole. While the hope is to describe something abstract in tangible terms, what eventually occurs is some wild hand-waving in order to sound smart.

But, in a lot of ways, science is ingrained in the culture of sport already. "Chemistry" describes how well a team can mesh together. "Synergy" is a fancy term bandied about when two good things become really, really great together. With these terms, you're taking a easy-to-understand scientific concept and applying it, in a broad sense, to a group of humans with a ball.

However, the #1 used "science" word in sports, aside from maybe chemistry, is momentum. Its something you can feel, but can't necessarily quantify. You see the Red Sox come back from the grave to beat the Yankees, Manchester United pick the last 2 minutes of the Champions League final to tear Munich apart, and the 2011 Dynamo use the last few weeks of the season as their personal playground. But can we actually measure momentum in sports? Some say yes. Most say no. Others say maybe.

Regardless of the science for or against it, momentum in sports is the one thing each fan prays for. "If we can just get on a roll, we'll be great. And if we can keep up that momentum, we can ride it into the playoffs".

So, with the Dynamo getting back to winning ways against New England, are we witnessing the beginning of some positive momentum? For the end-of-season push it is impossible to say. The next match against Montreal will prove very telling. But to anyone watching the rain-soaked Revs match, in particular the last 30 minutes, momentum certainly turned for the better. Can we put numbers towards that end? I think so. First, some ground rules:

Shots on goal are considered positive results, while those missing the target, or blocked by a defender, are negative results. I am fully aware that a shot missed by inches is a good attempt, while one dribbled at the keeper isn't positive, but what I'm looking for is an overall increase in offensive pressure. 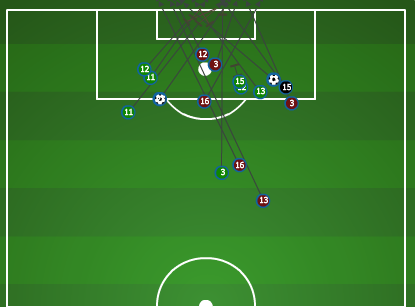 Not too shabby, eh? Looking at the shots for the Dynamo, we can see 16 total attempts towards goal. Some close, some far, and many in between. 8 of those shots were on target. 50% is a pretty good ratio of success, but I want to show that this ratio, throughout the game, started bad and built up to a crescendo of momentum in the last 15 minutes. So let's take a look at the big segments of the game.

The Momentum Switch with Ching

Ching enters the game for Carr.

Weaver enters the game for Bruin.

So what can we take from all of this? In the second half we can see a dramatic increase in shots on target - in both ratio and occurrence. But the inclusion of Ching, and then Weaver, followed by Creavalle, spurred our offense on to a relative explosion shot-wise. What occurred is something that can be described as positive momentum, where continued pressure and small successes build one team's confidence at the expense of their opponent's.

Honestly, I can't really say if this short-term, positive momentum will transfer into a long-term streak. Smarter people who think a lot more about this topic are split on the long-term effect of momentum in sports. Professional athletes, they claim, are not subject to these ups and downs between games, as their experience in the game leaves them immune to emotional effects. However, with a team like ours, well-balanced with experienced leaders and dynamic youngsters, I can't help but hope that we may hit stride after this win. Like I said earlier, the match against Montreal this weekend will prove very telling as to whether we built up any positive momentum in the last 20 minutes against New England.

Consumer Tip of the Week

Friends. We've all been duped. For too long have we idiotically frequented our local Half-Price Books, expecting the best deal in town. Oh, half price, that sounds positively genius. I can't afford not to buy the entire Wheel of Time series.

Duped, I say. Because, it turns out, Half Price Books is not the best deal in town.

Quarter Price Books is. Apparently. I haven't actually gone, but they sure made Half-Price Books look stupid.

We finally got back to winning ways this week, with just enough time to build up some momentum before the playoffs. Like I said last week, if we can't win the rest of these games, we don't deserve to be in the postseason. But I just cannot believe that Montreal will be the ones to stop us.