BBVA Compass Stadium: A look back

Co-Managing Editor Ordinary Orange Fan takes a look back at the inaugural season of BBVA Compass Stadium, discusses the Dynamo's dominance in Houston, and gives you his favorite moments at the Dynamo's new home.

Share All sharing options for: BBVA Compass Stadium: A look back

We are spoiled, aren't we? As a proud season ticket holder of the Houston Dynamo, I know for a fact that we rarely go home upset from a game here in Houston. It's not a 2012 thing - it's a every year thing. This year was special though, wasn't it? And what better way for the Dynamo to christen their new digs, but give the fans an undefeated season.

With last week's 3-1 win over the Philadelphia Union, Houston joined a small group by becoming only the fourth club in MLS history to go a full season without losing a game at home. 11 wins and six draws later, we now wait to see if we can carry this home success over to the MLS Playoffs. This weekend's Eastern Conference games will decide our seed in the playoffs and whether or not BBVA Compass Stadium will open its doors for more magic and memories.

It seems like a great time to look back on the history of success the Dynamo have at home, and a look back as the orange universe welcomed its newest family member - BBVA Compass Stadium.

That's the motto Dynamo players walk by on their way through the tunnel to the pitch where 22,000 screaming fans await. It's a fitting slogan to the stadium, as all three help make this a tough place to play for any team.

Truth is, the success the Dynamo have in Houston is astonishing. A stat that many fans may not be aware of is the Dynamo currently have the best all time home winning percentage in Major League Soccer history. What's even more incredible is Houston averages a mere 2.43 home losses per year. That is what I call success.

I can still remember opening day like it was yesterday. I was extremely fortunate and grateful to participate in the wonderful events surrounding the stadium's inaugural game. My family and I were honored to participate in one of the most important parts of the opening ceremonies - holding the American flag while the National Anthem was sung in front of the sold out crowd.

The crowd was treated to an instant classic - by none other than veteran Brad Davis. Davis sent the crowd into pure euphoria when his rocket of a shot found the back of the net, sending Houston to a 1-0 win. Davis, always knowing the right move for the moment, celebrated with our great supporter groups - after all, they have been with the team since day one singing the entire time.

One thing's for sure - while the Dynamo has had success since they joined our great city, BBVA Compass Stadium has quickly changed from a new stadium to a home. The memories fans have from stadium rallies, pestering politicians with "Where's our stadium" chants, ground breaking ceremonies, site visits (I know I went all the time), stadium tours, and all the events leading up to the first game will forever be remembered. Add 2012's success to that list - another testament of how the Dynamo front office, coaching staff, and players give it their all year after year to put a winning team in motion - on and off the field.

That is exactly why we give all we have as fans game after game, year after year. It's a two way street, one that other MLS clubs are not as fortunate - not many share as much success as the Dynamo fanbase and organization. I for one, am extremely proud to have witnessed such a wonderful year of Dynamo history.

I'll leave you with my top three personal moments of 2012 - I'd encourage all of our readers to share your favorite moments from BBVA Compass Stadium below in our comment section.

#1: Participating in the Flag Presentation during the National Anthem opening day. 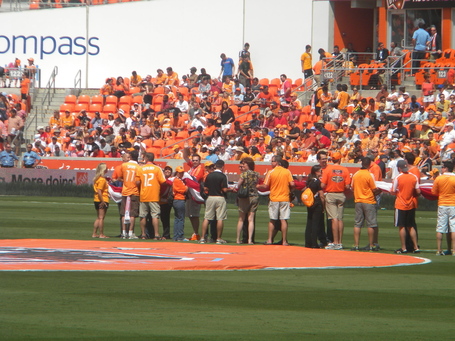 #2: Being one of the 100+ that unveiled the BBVA Compass Stadium naming rights during the Dynamo press conference. 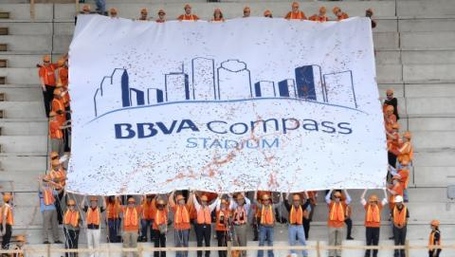 #3: Brian Ching's first goal at BBVA Compass Stadium. A classic moment where Brad Davis turns the penalty kick over to Ching and he buries it. This is my cell phone video, my apologies if you get dizzy.