Boy Meets World, Wu-Tang Clan, and how the Dynamo can use DC's attacking mindset against them.

The majority of the Dynamo's 3-1 win over DC United on Sunday took place as I was driving back from San Antonio. My usual savior, 790 AM, was playing some football game that wasn't the Texans, and traffic in some podunk town slowed the trip to a point where I could only make it home for the last 45 minutes. Following the updates on the MLS website, I was already borderline depressed at the 1-0 deficit at halftime.

Then, fate decided that I shouldn't watch the match at all. Wifi in my apartment wouldn't work, so I sat refreshing my phone and updating my twitter feed as Houston slowly made a comeback. With 10 minutes left, Local 2 news turned to a reporter at a local Texans bar to show the hoards of fans ready to take in Monday Night Football. And, for 5 heavenly seconds, I got to watch the perfect Dynamo play live on a bar-side television:

The ball fell to Sarkodie, who lashed it into the goal for a 3-1 lead.

I kid you not. While the Texans bar showed absolutely 0 interest in that goal, I proceeded to celebrate a goal that I watched on a TV... on TV. Stranger things have been done in the name of Dream Scream Believe.

First, a quick disclaimer: I'm in med school, so talking about medical disorders in an academic setting is commonplace for me. That being said, my example for the day is a legitimate medical problem that may very well have affected someone you know. I don't mean to belittle it, and am certainly not trying to trivialize its impact. It is just a good scientific example of what I wanted to discuss today.

The pancreas is a wildly important organ responsible for both exocrine (secreting digestive enzymes) and endocrine (secreting metabolic hormones) functions. The exocrine portion is a duct that releases the immature forms of the enzymes that digest all of your food in the small intestine.

During secretion say, after a meal, the pancreas proceeds to release all these enzymes into its duct system. It doesn't have any muscles to squeeze them out, but instead pumps a ton of bicarbonate into the duct, until the pressure builds up so much that it explodes into the lumen. But, if the pressure builds up too much on the duct, the volatile mixture of enzymes could turn on its source.

One of these, trypsinogen, is extremely finicky. It is completely inactive, but if, by chance, it should self-activate to trypsin, it will proceed to activate every digestive enzyme in your pancreas - thus digesting the organ from the inside out. That's pancreatitis. It's bad.

Just last round we found ourselves with a 2 goal advantage against a higher seed, with the prospect of simply hanging on in order to advance. SKC did the best they could, but poor finishing ensured our place in the ECF. Our willingness to defend first and attack only to pass the time worked because the Sporks were unable to capitalize on their bullish control of possession. Can we expect the same wastefulness from DC? Simply put, no. With Pontius potentially returning, De Ro insisting that he is pushing for a dramatic return to play, and Moffat currently listed as "out", DC looks to get a significant offensive boost while our midfield bulldog (a UK-centric metaphor that is woefully overused) is hamstrung.

To overturn their two goal deficit, DC will obviously apply pressure throughout the match. In the interest of not being idiots, we will assuredly defend similar to how we did in Livestrong Park - a fast and active midfield that will knock you off your balance if they can't take the ball from you.

But to turn some of that pressure on its source, we will need a midfield capable of stretching the field. While it would be nice to knock it wide and attack that way, I have a feeling that OBG, Davis, and Sarkodie will get sucked inside more often than not in defense. Any outlet should come from the middle of the park.

Distribution in the midfield against SKC was poor in that it didn't get us out of our half of put pressure on our attackers. In this first leg against DCU, we flipped that script a bit.

The ball was distributed wide, forward, and (most importantly) successfully, against DC. However, that takes advantage of a formation that was pushing for goals. How can we adapt to being on our heels? 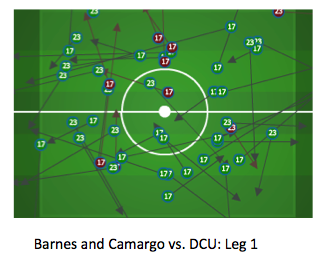 Same circumstances, obviously, but a subtly different result. Moffat's impact of the game was dampened by his injury, but you can still appreciate the differences when Barnes was subbed in (#23 in above figure). His passes stretch from centrally at the bottom of the image to up high and wide near the top of it. Most importantly, he was very successful in his distribution, and was also able to put pressure on the defensive backs of DCU.

With a DC United team that will be sending its midfield high, and hoping that pressure will result in goals, a quick outlet in the midfield could be just the thing to get the one back-breaking goal on the counter.

I realize that Moffat is pushing to be ready for the game this Sunday. Thank goodness. But as the match drags on, and the DC pressure builds to critical mass, a player like Barnes (or OBG if he is able to shift centrally in attack) could find acres of space behind United's midfield.

Boy Meets World, and the Destruction of my Childhood

I feel like most of the shows of my generation have held up fairly well with time. I can still look back on Saved By The Bell, Rocket Power (best. ever.), Power Rangers, etc with a smile. One of the seminal shows of my elementary years was Boy Meets World.

And it seems like the power that be want nothing more than to destroy it for me.

It started last week when Grantland reported on a spinoff of BMW, Girl Meets World, covering Cory and Topanga's daughter. That's fair. Except that it doesn't at all fit, temporally, with BMW.

But I can get past that. The real kicker came in last week's episode of Grey's Anatomy (yes, I watch it), where Feeny has been appearing as an elderly cardiothoracic surgeon.

So many spoiler alert's its insane, but who watches it anyway?

Feeny dies. Like, right in front of you. While operating on a heart, complete with fountains of blood and cascades of beeping from medical machinery.

Childhood is officially over.

Apropos Music Video of the Week

Whether its the amazing traveling Dynamo fans in the stadium or the players on the pitch, its time to bring the orange-tinted ruckus. I am unbelievably okay with winning ugly this Sunday. If Dom decides to save my blood pressure and allow us to attack a bit, like I discussed above, I would be pleased.

But if we can go in, make this game very very ugly, and come out with an aggregate win, a CCL berth, and a chance to avenge last year's loss to LA... well that's all I can really ask for.