Throughout everyone's childhood, there is always one white lie they were told that they believe for just a little bit too long. It could be where dogs go when they die, why the mall santa has a fake beard on, or why an experimental surgery turned their favorite dog into a turtle. Growing up, I loved The Police, and used to rock out to Roxanne on repeat without at all understanding what the song meant. When I did eventually get curious, I asked my mom what "turning on the red light" meant. In a moment of quick thinking, love, and an aversion to discussing the economics of prostitution in America, my mom told me that the "red light" meant Sting and his significant other were having an argument.

Cut to 6th grade, and an ill-fated argument with a classmate, I finally realized who Roxanne was.

What Roxanne isn't, however, is relevant to our first round road victory over the Chicago Fire. Conveniently, The Police are. Try as I might, I couldn't get "Every Breath You Take" out of my head as I watched Adam Moffat shade Chris Rolfe throughout the match.

Every Breath You Take - The Police. Courtesy of ThePoliceVevo

One of Chicago's most dangerous players since he was reacquired, team's had recently put a defensive midfielder on Rolfe throughout matches. Judging by results alone, this was disastrous to Chicago's end-of-season form. Well, everyone's favorite beard took up the task in the Chi this weekend, and as noted by - quite literally - everyone in the MLS media, his day went swimmingly.

Based on a helpful hint from Andrew Wiebe at MLSsoccer.com, who mentioned that the "heat maps" for Rolfe and Moffat lined up pretty nicely, I wanted to take a look at just how well Moffat contained Rolfe. 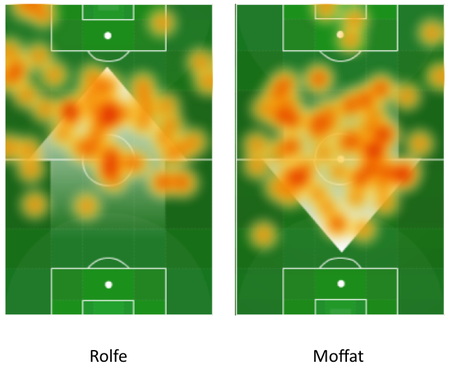 Yowza. Just from a macroscopic view, you can definitely see that for large swatches of the match, Moffat occupied near-identical plots of land alongside Rolfe. Of course, when Rolfe would take the ball wide, or drop further back to find space, Moffat wouldn't be too inclined to wander. This just gives a general idea of the space Moffat occupied, putting a sign in the ground that said "Rolfe not welcome".

From watching the match, it seemed that Moffat's constant hounding of Rolfe disrupted the Chicago attack. But do the stats back that up? 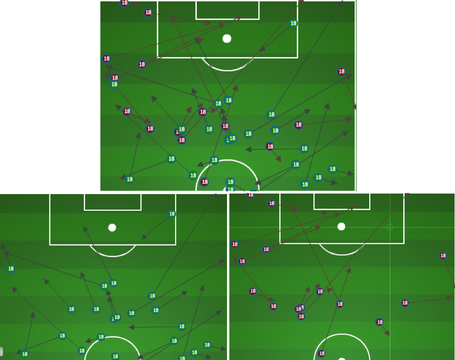 The top image is all of the passes made by Rolfe in the attacking half, throughout the match. Green was successful, and red was unsuccessful. Generally speaking, it looks like he had very good field coverage with his play, as he attempted to work around the pressure of Moffat.

In the bottom left, I've removed the unsuccessful passes from the figure, and you can see that, percentage-wise, he was fairly successful. He completed a host of passes, and did seem to advance the ball.

The bottom right, however, tells the real tale of the match. The closer Rolfe got to goal, the more likely he was to be unsuccessful in his passes. Just on face value, his crosses into the box were only 25% successful, and when he advanced to within 30 yards of the goal, he was only 30% successful. Whenever Chicago advanced through Rolfe, with a possibility to do damage, Moffat ratcheted up the pressure.

Sporting KC on the Horizon

While we can postulate as to what Moffat's role will be against SKC, it occurs to me that we have very little evidence to work with. While we have played SKC three times this year, to the tune of 2 draws away and 1 win at home, Moffat only featured in the first match - a 0-0 draw. The other two matches were during our brief foray into 4-3-3, and coincided with Moffat's injury.

So, while Moffat was the star of this defensive success, I see the ball falling in our centerbacks' court against Sporting. Plenty more will be written to preview the two upcoming matches, but a quick point I want to make is that Sporting will most certainly find the back of the net against us in Kansas City. The key, in my mind, is to ride Bruin's (potential) hot streak to an aggregate lead at home, then relying on a back line (that admittedly faded late in our last match in KC) to an Eastern Conference berth.

Regardless of how the defense approaches the match, it would be a good idea for them to dial up the Sting records for some tips to containing Zusi and co.

Get excited for this match, friends. BBVA got a second breath of life in midweek, but this is officially our last match of the season at home. I'll see you there.