Captain Kamehameha is Back: Brian Ching Returns to the Dynamo

Share All sharing options for: Captain Kamehameha is Back: Brian Ching Returns to the Dynamo 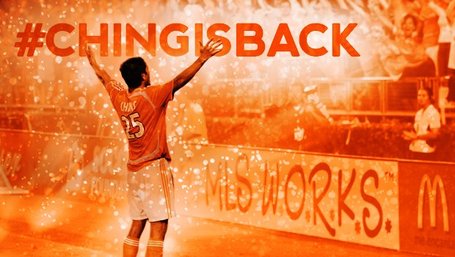 This release came from the Houston Dynamo at 10:30 a.m., about the same time he walked out to practice, probably the first and last time he'll be the last guy out to the field. Someone on Twitter said it best. All Dynamo newbies are about to get an object lesson on what it means to train and play the Dynamo Way. The 2012 season begins now.

HOUSTON, TX (Thursday, February 16, 2012) - The Houston Dynamo have reacquired forward Brian Ching from the Montreal Impact in exchange for a conditional draft pick in the 2013 MLS SuperDraft, it was announced today.

Ching, an original Dynamo player and the club's all-time leading goal scorer, was selected by the Impact in the 2011 MLS Expansion Draft in November. Ching returns to Houston among the leaders of several franchise records, including games played (fifth, 168), games started (fourth, 144), and assists (third, 24). His club record 63 goals is nearly twice the amount of the second player on the all-time list (Dwayne De Rosario, 32 goals).

"I am very happy to have Brian back with the team," said Dynamo head coach Dominic Kinnear. "This is a very important year for the Dynamo, and if anyone deserves to be involved with the team, it's Brian."

In 2011, Ching was limited to 20 appearances due to injury, but still tied for the team lead with five goals. The forward was instrumental in Houston's run to the 2011 MLS Cup Final. In the playoff series victory over Philadelphia, he assisted on the game-winning goal in the first-leg win and scored the lone goal in the second game, the final MLS goal scored at Robertson Stadium.

"It feels good to have Brian back where he belongs," said Dynamo president Chris Canetti. "It was a long and difficult process, but we got the right result. I am happy that he will have the opportunity to play in the new stadium in front of his Houstonian fans who so badly wanted him here."

Ching, a native of Haleiwa, Hawai'i, became the face of the Dynamo franchise by scoring four goals in Houston's inaugural game in 2006. He capped the season by winning MLS Cup MVP after scoring the tying goal and converting the winning penalty kick in a shootout win over New England.