The winning just continues this week, as the Houston Dynamo Reserves took out the Colorado Rapids' reserves 1-0 this morning over at Houston Amateur Sports Park.

Continuing the theme of winning late, winning often, Bryan Ownby had a nice strike for the game's only goal in 80th minute. Highlights above, Dynamo's recap below. You can also see a nifty photo gallery of images from Dom's Disciples' Nigel Brooks on his Facebook page here.

The Houston Dynamo opened 2012 MLS Reserve League play with a 1-0 win over the Colorado Rapids Tuesday morning at the Houston Amateur Sports Park. Dynamo rookie Brian Ownby scored the game's only goal in the 80th minute to break the deadlock.

The game's best early scoring chance came in the 23rd minute to Colorado. Right back Eddie Ababio and forward Andre Akpan combined for a one-two combination that resulted in an Ababio shot off the right post.

Dynamo goalkeeper Tyler Deric made five saves for the game, including one in the 40th minute from a long-range blast from trialist Luis Eduardo Schmidt. Deric did well to knock down the 30-yard strike and pounce on the rebound before a Rapids player could reach the ball.

Houston was unable to muster much offense in the match and was outshot 15-8 by the visitors. Second-year midfielder Alex Dixon nearly broke the scoreless tie in the 77th minute when he picked up a loose ball and shot from 30 yards out, but his attempt sailed over the crossbar.

The Dynamo finally took the lead in the 80th minute off their first corner kick of the match. The attempt was cleared to Warren Creavalle who found an open Jermaine Taylor in the box. Taylor's left-footed strike was stopped by second-half goalkeeper Ian Joyce but Ownby snuck through to send home the rebound.

The Dynamo Reserves return to action on March 27 when they take on Sporting Kansas City at LIVESTRONG Sporting Park.

For more information on the Dynamo Reserves visit HoustonDynamo.com/Reserves.

All statistics contained in this boxscore are unofficial 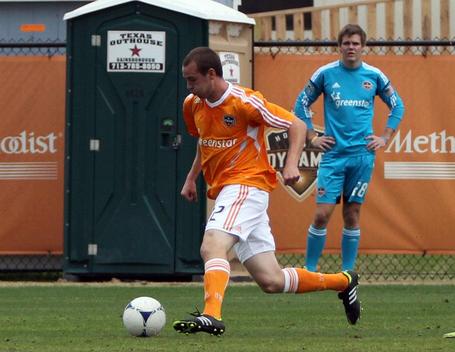