Counsel for Officer Raymond Perez filed suit today in the Harris County District Court, claiming negligence and assault in connection with the scuffle at the Roosevelt Room back in early February. Tyler Deric, Warren Creavalle, Alex Dixon, Will Bruin and the Houston Dynamo organization were named in the suit, which is demanding compensation for a laundry list of perceived damages.

The interesting part about the court filing, Perez v Deric et al, is the facts section of the document where there is virtually no information to back up the suit. Typically you'd expect to see basic facts like who, where, what, when and the connection of each of the named defendants to the case. Instead you get: 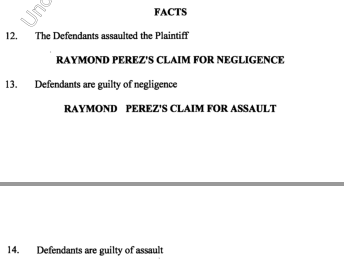 It's also a bit strange that the Dynamo are named since the players allegedly involved in the incident were not at the club in the course of their employment with the team. Basically it sounds like Mr. Perez got himself an ambulance chaser and is taking a stab at making some money. Of course, I've seen no facts and I'm no lawyer, but I'm guessing people more versed in the legalese than myself will likely get the same feeling from this filing.

It's of course the job of the plaintiff to prove their case and since Mr. Perez is requesting a trial by jury*, he'll get the chance in court to do just that. If he has a case and can prove it (the burden of proof is much lower in civil court) then so be it, but based on all the questions already surrounding the incident and the various statements from witnesses, this has the real feel of a desperate cash grab.

In all likelihood this case never reaches court and is settled quietly behind the scenes.

*For the record, requesting a jury trial doesn't guarantee you'll get one.