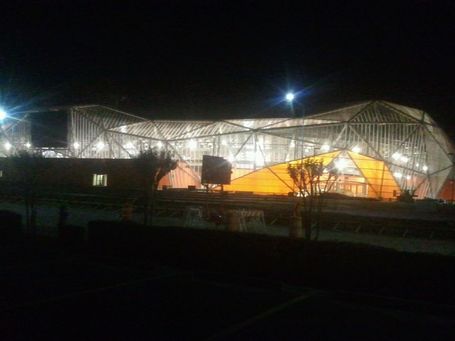 Twitter user and Dynamo supporter extraordinaire @nobius posted this pic tonight of BBVA Compass Stadium and it was just too durn beautiful not to share.

As a point of interest, the pic was taken across Texas Avenue from the stadium in one of the parking lots that, according to an ordinance passed today by Houston City Council, will be Tailgate Central for Houston Dynamo games. And by the way, when you read that link check out that the Astros are announcing they'll decide within a week whether or not to allow tailgating before Astros' games. Well, when you consider the product they'll put on the field, as well as the impending abomination of the shift to the Beer and Softball League, I would think that tying one on would be almost a requirement before going into Minute Maid Park. Look at the difference in the response:

Also, as regards the title of this post, a caller and Texian Army member mentioned this moniker for the stadium on Glenn Davis' program the other night. "The Raven" was a nickname for Sam Houston given him by the Cherokee Nation and is on the Texian Army crest (below). And the stadium has something of a nest-like look to it. Hence: Raven's Nest. What do you think?