Share All sharing options for: Dynamo at Seattle Sounders: Roadtrip faces history, both good and bad

Tomorrow night, our Dynaroadmen keep their early tour going with a visit to the CenturyLink painted-over runway to face the Seattle Sounders at 9 p.m. Central (God’s Own Timezone). The match will be broadcast live on NBC Sports Network (check your cable provider for channel number). It can also be heard in the Houston area on KPRC 950 AM and in Spanish on La Ranchera 850 AM.

We all know that as far as the opening road trip is concerned, the Houston Dynamo have six points down and 15 to go before May 12 and the opening of BBVA Compass Stadium. The superlatives are many, as the Orange are now unbeaten in their last eight regular season games and have won four consecutive regular season road games, all via shutout. Add in the 2011 MLS Cup playoffs and the total unbeaten road string goes to 6-1-1 with a goal differential of +7 (11-4). But, did you know that the Dynamo are now the first team in MLS history to open the season with two consecutive road shutout wins to begin a season? That is a far cry from the seemingly-interminable wailing and gnashing of teeth that accompanied the well-documented road woes of 2010 and pre-September 2011.

So now, the only thing missing is for Dynamo actually to win a game in or around the Seattle-Tacoma metropolitan area, something they have hitherto not done. All the history-making they have accomplished so far comes smack dab against this set of numbers, an 0-3-2 mark over three years at both Qwest/CenturyLink and the practice runway at Starfire Sports Complex (US Open Cup extra time loss in 2009). That is two points from five games, the last one coming in a 1-1 draw exactly one year ago Sunday in which the Man of the Match was clearly Tally Hall. (Of course, Seattle have also never won in Houston, as Dynamo own a 3-0-1 beat-down mark on them in the Bayou City, in which the Sounders’ lone point came in 2009. That means that the two teams have a 3-3-3 mark in all competitions.)

Follow the jump for prediction and analysis, as well as Dynamo Insider's video preview of the game. 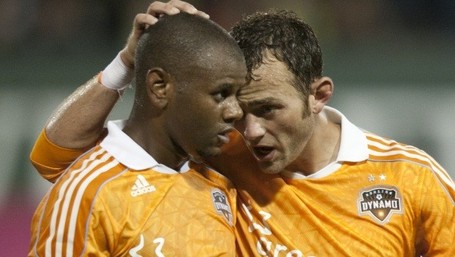 Now, I have to admit that when we bounced those guys out of the playoffs in 2009, and when we beat them in both 2010 and 2011 at Robertson, it really did cross my mind when I saw some disappointed Seattle fans all three times to walk up and offer some words of encouragement, a hand shake and some "Good game" to my fellow humans. Then I got closer, and they were still chanting in the crowd after their team had their ass handed to them, still acting like they invented this game, and well, that thought just kept on crossing my mind, and crossing, and crossing, until it just crossed right on out of there. So when I say I want Dynamo to bust this duck in Washington State, I mean it.

Playtherapy made a point the other day, and many others have also, that looking at both our offensive woes over the first two games, and Seattle’s strong offense (against both a good Santos Laguna team and a depleted Toronto side missing the injured Torsten Frings [German for "uncalled handball"]), it will be very, very important to score first. In the two wins so far, Dynamo have not had to come back from a deficit, which is actually another big step up from last year. And in front of a highly-caffeinated (Remember, this is Seattle.) crowd of 40K+ and a national television audience, going down by any amount is definitely not in the gameplan. And even this is no guarantee of anything as in three of the five games Dynamo have played up there, including last year, the team has had a 1-0 lead only to lose it. (The other two games were a 0-0 draw and a 2-0 loss.)

The defense has been unbelievably stout so far, which is a very good thing, as Dynamo’s entire offensive output so far has been an injury-time winner from a defender and a penalty kick. The second half of the San Jose game showed once again that without an effective offensive attack, the defense will come under withering fire. Generating something from the run of play would give the offense some momentum going into an extended break, as this will be the team’s last game until an April 15 match at Chicago Fire. That will be a 22-day break, easily the longest of the season.

Many have written that the offensive struggles can be traced in part to Luiz Camargo’s absence in both games, but I would also add in the importance of Corey Ashe’s absence in the second. With Camargo out, Je-Vaughn Watson has played all the minutes at Central Attacking Midfield, at times looking just fine and at others looking like an incredible whirling dervish. You never knew what you were going to get out of Watson these first two games, and where on the field you were going to get it.

This was especially exacerbated in the second game, when Ashe was out. Jermaine Taylor replaced Corey quite capably, and put in a solid shift at left back. But, Taylor could in no way provide the link-up play to Brad Davis that Ashe contributes every game. The midfield runs through the Dynamo MVP, and with the need to track back to the get the ball, Davis frequently had to go further and further back. Not only that, but with Watson at times alternately showing flashes of brilliance and bone-headedness, there was no way to put together any kind of consistency of service. Of course, it would also help if Will Bruin wouldn’t try to fire his shots through the keeper, Dominic Oduro-style (pre-Chicago version), when he does get service. Bruin’s maturation is going to have to come quickly if he is to improve on his five-goal performance of 2011. I still expect Bruin to start, because as Zach pointed out over on the Sounder at Heart blog, playing on the plastic stuff might just mean that Brian Ching's knees will get some rest. Like him, I would like to see a Bruin-Calen Carr pairing up top and inject a little speed into the attack, speed that has been sorely lacking.

One thing to note is that both Taylor and Watson played in Jamaica’s 0-0 draw with Costa Rica Wednesday night. Watson played into the second half, while Taylor saw red in the 42nd. What this means as far as fitness for Friday is anyone’s guess, but it does mean that if Camargo is not on the field, the midfield may be even more unsettled.

The good news is that Ashe is projected as probable for the game coming up, the only mention one Houston’s injury report. However, the Seattles are not quite so healthy. The two keys on the injury list for them are captain Mauro Rosales (knee injury) and Eddie "Grown Ass Man" Johnson with a hip injury. Now, you could argue the latter is not much of a loss as Johnson’s return has hardly been the stuff of legends so far, but losing your captain can frequently be a disruptive thing, especially from the guy who runs the Sounder attack from midfield. One can only hope so in this case, but to be truthful, I do not see that Rosales’ loss is going to make Seattle all that less dangerous. David Estrada cannot get a hat trick every week, and he will see a much stouter defense in Orange than the one in Red he scored on early and often last week, but he is part of a powerful attack.

One other note. I have read somewhere that the ref is supposed to be Baldomero "Unholy" Toledo. Make of that what you will. For my part, my feeling is, while I have no love for Toledo, who has had a history of spotty decisions against Dynamo, when it comes to MLS officiating, who exactly would inspire confidence?

Yeah, I couldn’t come up with a name either.

Here’s a preview of the game from Jonathan Kaplan and Johnny Rocco.

My prediction: I believe this game is going to be low-scoring and frustrating. If Dynamo had put together any offensive fluency so far, I would feel better about the Orange prospects for extending the win streak. However, I also do not think that the defense will break. Bend maybe, but not really break apart as Seattle has a tough attack, but the only time they were really tested was in Mexico, where they conceded six!