Share All sharing options for: Five days to go: Five on five for No. 25

It is just five days until the Houston Dynamo face off against Chivas USA to kick off the 2012 MLS season, 6 p.m. Houston time March 11, at the Home Depot Center. And if all goes according to plan, it'll be kalua pig, lomi salmon and pineapple all around once again. And that my friends, from Day One, has been the Dynamo Way.

In this countdown series so far (Click on Nine, Eight, Seven and Six to see them), we have taken a look at some numerology, look-backs at some great moments in Dynamo history and generally built a theme that the team has had a brief history here in Houston, but an incredibly rich and varied one that carries within it what it means to be a member of the Greater Orange Diaspora.

And despite the protestations of one particular colleague here on this site who shall remain nameless (but instead by referred to in the original pig latin as "aytherapyplay" (You know who you are)), I am not keeping my head in the past, just understanding that our glorious history will carry us into an even brighter present and future. Kevin Payne-isms be damned.

So, today we move on to take note of five meanings the number five carries for our Dynamen, led by one person in particular.

May, the fifth month of the year, will see us opening BBVA Compass Stadium. Not for nothing is it being called The House That Ching Built, and not because the luau begins there. (Though if anyone is hosting one there in May, please send me a shout.)

Here is some simple math: 5 x 5 = 25. And No. 25 means only one thing around these parts, Brian Ching. So with five days to go until the 2012 season begins, here are five moments that encompass the career in Orange of Captain Kamehameha. 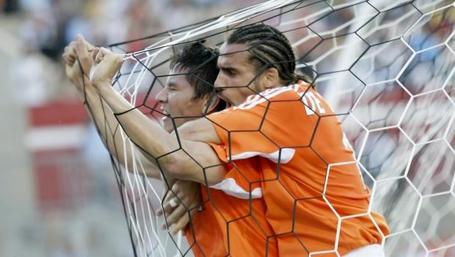 No. 5: First goal in Dynamo history. On April 2, 2006, the newly-minted Houston Dynamo hosted the Colorado Rapids in front of 25,468 at Robertson Stadium in top-flight soccer's first game in Houston since the days of the old NASL Houston Hurricane. Dynamo would go on to win 5-2 in that game (which makes it especially important to mention in this post). In the 13th minute, however, Brian Ching would take a feed from Captain Wademerica Wade Barrett, who himself took it from Dwayne De Rosario and bury the ball for the Orange's first-ever tally. The debut put Dynamo on the front of the Houston Chronicle main and Sports sections. What makes this impressive, though, is that the Houston Astros opened their season on April 3, in defense of their one and only National League championship, and were relegated to side coverage. For that, we can thank Ching, who went on from this goal to score three more that day.

No. 4: Bicycle kick against DC United Sept. 30, 2006. This goal has been played and played and played again. The 2006 Goal of the Year, when Ching gets all alone against the Supporters Shield-winning D.C. United at home (creating space away from a certain Robert Allen Boswell) and burying a bike. What makes this goal so interesting, apart from the personal aspect as it was the first Dynamo game I ever attended (along with a certain aytheapyplay and former fellow blogger Mr. Three D), is that along with the championship that year, it set the tone for the entire organization. Mired in a 0-0 draw against a powerful opponent at home, Dynamo were creating chances in that game and holding their own. And then... magic. And what's more, the win brought the team its first ever playoff berth. So living by the maxim that you can never see this goal enough, here you go:

No. 3: Equalizer against New England Revolution in 2006 Cup Final. Six weeks after creating the above moment, which more than any other set a tone the team tries to live up to to this day, Ching scored a late equalizer after Taylor Twellman scored in extra time. The strike came swiftly after Twellman's goal and cemented the message from Sept. 30. Never, ever count out the Houston Dynamo. Even though Ching would also score the decider PK, the equalizer was the key moment. "I was going to die trying."

No. 2: Winner to beat Seattle in 2009 Western semis. The playoffs that season presented a chance for redemption after the two-time defending champs fell to New York Red Bulls in the 2008 Western semis. Seattle, in its first season in the league, started to show everyone not from Washington State just how irritating they can be. And hey, if I'm them, I'm loving that. I want nothing more than for my team to be the one that really pisses everyone else off. So, mission accomplished. Though from this side, how great it was to not only beat the Seattles down into the Robertson Stadium ground, but do so in extra time of the second leg of a two-legged series that at that moment was knotted at 0-0. Not only that, but how enjoyable it was to read the Seattle reaction online, especially as regards Brian Mullan's "magic bullet" of an assist. Ching never hesitated, not even once, and rifled that ball past Kasey Keller for the winner. What a great moment. Que golazo!!

No. 1: Final goal ever scored in Robertson Stadium. Nov. 3, 2011. At the moment I am writing this, there are 67 days until a ball will be once again kicked in anger in an MLS match in Houston, Texas. But, when Captain Kamehameha scored the last goal ever at Robertson Stadium, wonderfully bookending Dynamo's Robertson Stadium Era, it was indeed a Beautiful Day. 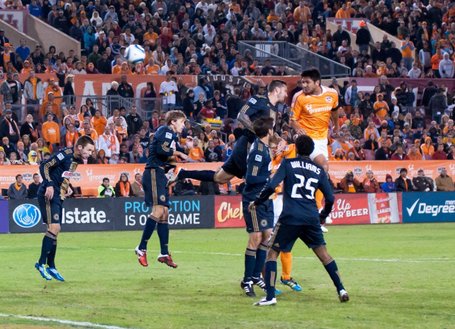 (And if you look closely there, you can see Michael_D, aytherapyplay and myself standing in the stands. We're in Orange.)