Two days to go: Dynamo having a two-riffic time of it

Share All sharing options for: Two days to go: Dynamo having a two-riffic time of it

It's just two days now until the Houston Dynamo open the 2012 season in a game against the Washington Generals, and...uh...wait just a sec... what's that it says here? Chivas USA? Dynamo are opening the season by playing against a bottle of scotch? That can't be right. Playing FOR a bottle of scotch maybe, but, oh well. Whatevs. MLS, what a wacky league.

Anyway, the Men in Orange are set to get the campaign going by dribbling around and through whatever goatherd they can round up over at the Home Depot Center at 6 p.m. Central Time Sunday night. And if there just so happen to be any bottles of scotch floating around, I'm sure the appropriate actions will be taken. (Though of course, if someone decides to "Do a Toronto" and throw one onto the field, this will be a bad thing as one should never abuse the alcohol in that way. I am led to understand that both MLS and civilized people frown on, or even issue sanctions against, such behaviors.)

So, continuing our theme here in this countdown series (Installments Nine, Eight, Seven, Six, Five, Four and Three can be seen when you click on them.) the number two can be said to have some significance in the Land of Orange. According to some, two reflects the power of discernment, and the need for planning. While no less a light than Plato himself disagreed, saying that two suggests a relationship and a relationship will in turn introduce a third factor, maybe even a goal. Now, Plato may be well known for keeping a clean sheet against the powerful Germans (full video at the bottom of this post), but for our purposes today, I think we'll follow the lead of his No. 1 student and launch a powerful header into the topic. (2-pic?)

Turns out, the number two shows up quite a lot around these parts, and Dynamo past and present is the richer for almost all of it.

Two names: We all know that the team came here in December, 2005 and very soon announced it was adopting the name Houston 1836. Following a little bit of a kerfuffle about exactly what that date celebrated and whether those were good memories or not, the team dumped it and quickly changed to Houston Dynamo, reflecting the city's energy industry and not the (formerly) KGB-backed squad of the same name. Whatever it was called, and whatever you think about that, the best part was that it quickly gave us...

Two stars: When former Georgetown University men's basketball coach John Thompson led his Hoyas over the late, great Phi Slamma Jama in 1984, he remarked that a championship is "the period at the end of every sentence." Well, after Dynamo went two-for-two in MLS Cup finals in 2006 and 2007, we had enough periods for a small paragraph, much like this one. Also, some basic math, it is often said that this makes Dynamo two times better than the Frisco ISD Home XI, but this is clearly not true. We all know that two times nuthin' is, as the Hero of Canton himself can figure, leaves behind nuthin'. And that's pretty much what's north of here.

No. 2: Eddie Robinson. Johnny Rocco tells you how it's done and how it's going to be. And that's the way it was in the center of that defensive line from 2006-08 before injuries did a Key Largo on his career. One thing's for sure, if those Dynamo Academy kids he's coaching now think they've got it easy, they're about to get an education real quick. 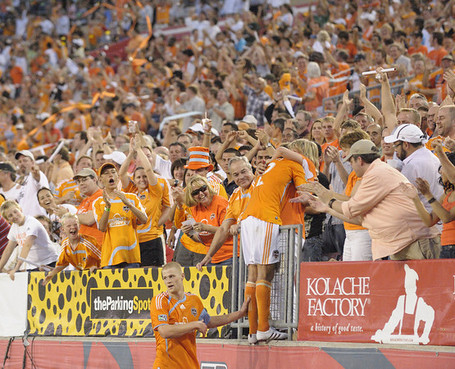 No. 22: Stuart Holden. Our Stuie. Holden was quite the bright light from 2006-09 playing here in the town of his youth. Born in Scotland but raised in Houston, he was Dynamo's first real Hometown Hero. And if those leg-breakers Nigel de Jong and Johnny Evans had not done the business on Holden, there's quite a bit of US National Team and Bolton recent history that might be different. What I'm finding interesting is just how many writers in England are pinning the Wanderers' relegation battles this season on Stuie's prolonged absence. And I may just be a homer here, but I'm inclined to agree.

2+0 = A lockdown: And as long as we're having math lessons, take a look at those numbers on Geoff Cameron's back. Tally Hall gets to do this math every day, and he, like we, have got to love how it adds up.

We're Number Two! We're Number Two!: We all were a bit downtrodden when Dynamo fell in MLS Cup last season, and we all know that when it comes down to it, there is really only one team every season that should feel ultimately happy with how it all turned out. (Unless of course, you support the Rave Cyan and spend your days and nights trying valiantly to maintain that three US Open Cups equals anything more than three buckets of warm spit. Really, the rest of us appreciate your efforts and think it's awful cute. Endless enjoyment.) However, that being said, finishing No. 2 in 2011 was a fun accomplishment, coming as it did after the sort of thank-goodness-MLS-doesn't-have-relegation year of 2010 and a start to 2011 that had some of us {Ahem. Cough, cough} doubting the Orange would even make the playoffs as late as August. So yeah, take that and smoke it.

Though this year, it may just be time to bring the No. 3 into the picture.

And, as promised, movie time: