One of the main rules of the Intertoobz is that thou shall not repost, (or cross-post or go postal or something like that. I've never been very good with rules.). However, this one is something I noticed today, and put over on the comments thread of the previous post about the third kit, as well as on the DT Facebook page. (What, you haven't "Liked" it yet?Then get thee hence.)

Anyway, I stumbled across this wonderful blog post at the Fun While It Lasted site about the history of soccer in Houston, particularly about the little-known (until now) Houston Dynamos (with an s). On March 7, I posted a long-ish piece about this very topic myself. And about the Dynamos, I wrote the following

Houston Dynamos: First appearance of this name in Houston. This team played outdoors in various incarnations in high school stadia from 1984-1991. (Wiki entry says 1983, but it's actually 1984.) This team is perhaps best known today as the one that brought defender Glenn Davis to Houston, where he has stayed ever since. Best player, though was Portuguese striker Jose Neto, who came up with Benfica.

And that was it. The Fun While It Lasted piece though, goes many orders of magnitude into the Wayback Machine than I did, interviewing Davis about the team (including one hell of a story about the time the team played against a Carolina squad that included none other than an aging Sir Bobby Moore. I shit you not. Read it and be amazed). But what really struck my eye was that picture at the top of this post.
Take a good look at it. Click on it and emdynamoize it to make it bigger. Then come back here. Don't worry. I'll wait.

OK, now look at this image of our Houston Dynamo's (with an apostrophe-s) third kit: 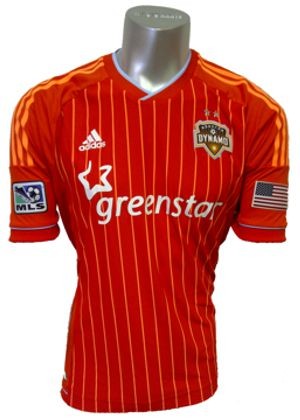 Holy Pinstripes Batman. Could it be that what's old is actually new again? What do you think?