Been off the computer for a few days, but the Houston Dynamo have not. The team has been using this extended layoff to make us all just that much more excited about the impending opening of BBVA Compass Stadium.

First, there's this video above, which is just a shit-ton of awesomeness. What's better: The sheer Orangeness of it all. What's best: I can see my seats.

For even more, go below the fold here to check out what all of this might mean money wise, courtesy of a great piece by Jose de Jesus Ortiz on the Chron, how that might fund a Herculean player bid and some Heaven's-eye views of the stadium itself.

First, Ortiz. In this piece right here "New stadium sparks financial windfall for Dynamo", Ortiz goes on to relay the green that's coming the Orange's way. I think the key part of it for me is this sequence:

With Dynamo Soccer L.L.C. and Dynamo Stadium L.L.C. taken into consideration, revenues have essentially doubled from last year, according to team president Chris Canetti. For accounting purposes to pay for the $80 million debt service on the stadium built by the club, some revenue goes to the club, and other revenue goes to Dynamo Stadium L.L.C., which handles non-soccer events and pays the note on the stadium.

"It changes everything when you move to a great new facility, particularly one in downtown of a major metropolitan city like Houston," said former Astros owner Drayton McLane. "It gets people excited. People that have not been going to Dynamo games start coming to games.

"That certainly happened to us (moving from the Astrodome)."

The Dynamo have traditionally averaged around 17,000 fans per game. This year, they're optimistic about selling out the team's 20 games in the 22,000-seat stadium. The season-ticket base has gone from around 5,000 last year to more than 10,000 with five weeks until the stadium opens.

Apparently the goal is to establish a season-ticket base of 12K, which rivals those of the Dis-astros and Rockheads. Personally, I don't think all 20 games will be sold out, but I also think that if the team can even get 50 percent of these games to be sold out, then they should all take a bow.

Now the key is getting the team to spend this extra dough on a DP striker or two. ("Herculez... Let me introduce you to Chris. Chris...Herculez.") If they don't spend it on the field, then, after all, what's the point? This defense is not going to be around forever, so the time to put together a serious strike force is right now. Can you imagine Herculez Gomez in Orange, getting service from Brad Davis? I'm trying not to right now because it's late as I write this and I need to relax and go to bed, but...wow...just think of it... So much for going to bed. Of course, as Grant Wahl tweeted today, the Wiz still owns his MLS rights, which kinda throws water on the idea. But still, in a layoff this long, Orange minds turn to thoughts of goals. Lots and lots of goals.

Finally, the Dynamo posted some really kicking aerial views of the new digs on their Facebook page the other day. Now we can all see our seats. And if your jaw doesn't drop at these images, then you must be a tetanus patient or something. Enjoy the views: 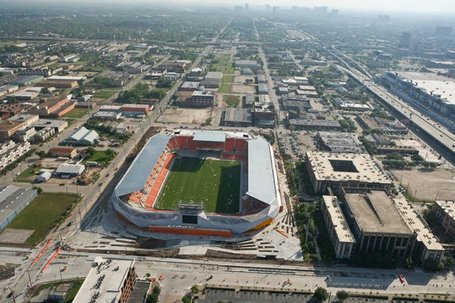 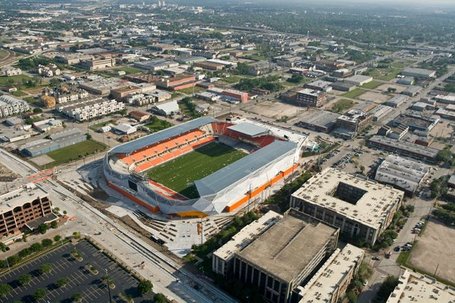 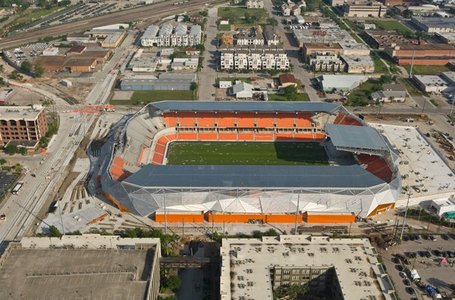 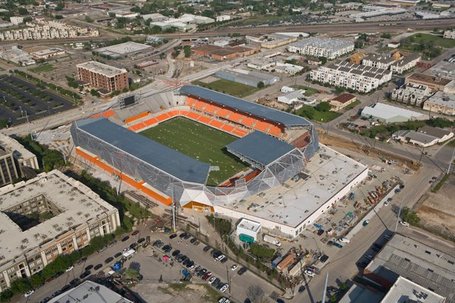 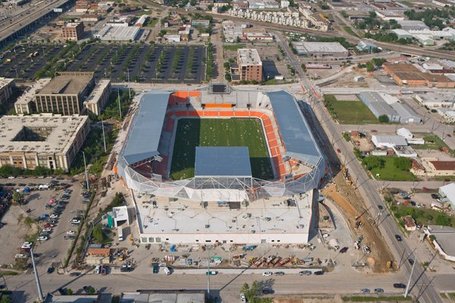