Share All sharing options for: The final countdown before BBVA Compass Stadium opens

Exactly 24 hours from now (if I've done this whole advanced publish at a particular time and date thing correctly), our Houston Dynamo will kick off against (The) D(amned)C United in the first-ever match at BBVA Compass Stadium in front of 22,000 very loud supporters.

(First parenthetical: Last night at the Dynamo Academy's 3-0 loss to the US U-17s in the "soft opener," the stadium could not have been more than a quarter to a third full. And yet, there were times I could not hear Playtherapy sitting right next to me. Something in the stadium design must reflect the sound right back to the field, though I leave it to you sound engineer types to confirm that. I can only imagine what 22K are going to sound like in that place. It's going to be rocking.)

The game is the first of what might just turn out to be five consecutive sell-outs (at least) to start the new place off to a rollicking good start. The Tuesday night game against the Portland Timbers, it was announced today, is only 500 tickets away from being sold out, while the Memorial Day weekend match with the Gag-me-axy is only 200 away. The Valencia game May 31 and the June 16 vs. F(U)risco are also almost guaranteed to sell-out. Any doubt you may have had that this stadium really does mark a turning point should be erased. This point has been made by many people, including our very own DT Overlord Zach Woosley in Tom Dart's piece for SI (link here).

(Second parenthetical: Michael_D will be attending his first game there on Tuesday night and earlier this week reported that the only good seats still available were on StubHub. Wow.)

I have been asked how this stadium opening is different from other stadium openings in Houston history. It's a very good question, and one that has perhaps a more emotional answer than even I expected. 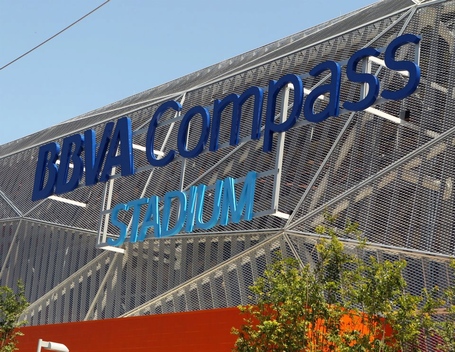 (Third parenthetical: Looking at the metal mesh surrounding the stadium the other day, I was struck by one thought: It's a cage." Hence my new nickname candidate: "The Cage." I like it for four reasons :

Make of that what you will.)

I have been alive (though not always experiencing said openings with my own personal eyeballs), for every major stadium opening in my city since the Astrodome (1965). That is not many, but it does include: The Summit (1975), Enron Field/Minute Maid Park (2000), Toyota Center (2003), Reliant Stadium (2004) and now BBVA Compass. The construction marks the end of the city's 12-year stadium-building boom, as we seem to have run out of major league sports that might need a new place to play. 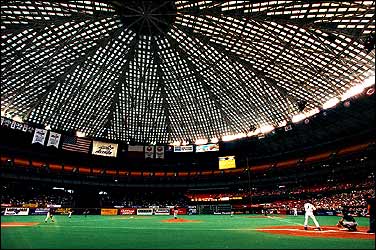 The Astrodome's best feature, yes, even better than the original scoreboard, was the mesmerizing ceiling. You couldn't not look at it. Ever.

Each of those stadium openings was marked with celebrations, fun and palaver, but the only other parallel among any of them with what we are likely to see tomorrow would be the Eighth Wonder of the World (and possibly the Summit, but for different reasons). The one and only Astrodome marked Houston's entrance into big time, major league sports. The first and still best-ever domed stadium was a technological marvel in every way, both structurally, with the sheer volume of space enclosed, and architecturally, with its unique sense of place and space. Houston in the 1960s had moved from the largish southeast Texas city of its past to a future as Space City. The Astrodome was a game-changer not just for Major League Baseball, but for the city and sports fandom as a whole.

Of course, it was good that all of that was true, because it was also, total truth be told, a lousy place to watch baseball, if you liked watching baseball. The angle of the seats was all wrong, facing not the infield but the outfield. The sight-lines were off. The painting over of the ceiling windows necessitated the invention of Astroturf/artificial surfaces (You're welcome Seattle Sounders fans.). About the only thing it did well was provide an incredibly loud experience. No sound escaped, so on the few occasions when you had 55,000 people yelling, it was impressive, to say the least. It was definitely the House of Pain. The Dome encompassed all of the wonderful contradictions of the city that birthed it, wonderful/awful, industrial/futuristic, innovative/makeshift, hated and misunderstood by outsiders/loved by insiders. Everything.

As for the Summit, well, without it, there would be no NBA here, and no hockey, so a game-changer in that sense to be sure. It was, to be fair, the first truly modern NBA facility in the nation, but it's almost complete lack of personality is now commemorated by almost no one remembering it was even there. It was a completely functional, but boring place to watch any arena sport. Now it's a mega-church.

That brings us to the Houston Stadium Building Boom, which as stated above, ends tomorrow. The other three stadium openings that mark this era were all enormous fun, as teams either moved or were invented from whole cloth. They all had their own unique aspects, the Astros finally had a real baseball stadium, the Texans opened the largest stadium in Houston history and the Rockets had, uh, hmmm, let me think for a minute here, uh, Oh yeah!, a place in which I saw Sir Paul McCartney play for the first time (worth its construction as far as I'm concerned).

The level of passion you are about to see unleashed in 24 short hours makes this stadium opening unique since the time of the Eighth Wonder. And the simple fact of it is this. We have all read about architectural designs, orange seats and the entrenchment of soccer on the American sports landscape. But one thing that fans of baseball, football (American rules), basketball and hockey do not have is the history of derision and the sense of always being on the outs. Soccer fandom in this country has been so often looked down upon, with some sports/media figures even making careers on disrespecting our sport, our selves and our interest. For years now, we have been asked the same question, some version of "When will soccer ever make it here?" And the subtext has all-so-frequently been "What, you some kinda commie weirdo? I have no idea how to talk to you, so I'll ask you this condescending question. Now, can we talk about a 'real' sport again?"

My attitude has always been a sort of "Yeah, yeah, bring it on. Haters gon hate." But you know what, the truth is it has always been irritating. As a soccer supporter, I don't have to explain anything to anyone. And the game itself needs no explanation or justification. There is no more need to rationalize loving this game than any other, and the presence of completely legitimate reasons in the face of such unrelenting hostility saying more about the hostile ones than about me was just all too annoying. Tell me you haven't felt the same way. When Colt Stadium opened in 1962, did Houston baseball fans have to justify themselves and their sport? The Summit in 1975? No. Not at any point. The only thing the Aeros have had to justify is being a minor league team. But ever since 2006, we have all heard it, over and over and over again.

So tomorrow, when that ball is kicked in anger for the first time at BBVA Compass Stadium, I will be letting out a full-throated yell. And in that yell will be everything I have always felt about loving this game, loving the NASL Houston Hurricane in the Astrodome of my youth, loving my soccer city of Houston and loving the Houston Dynamo. Finally, my game, my team, my Houston soccer culture has a voice. And sometime after 3:30 p.m. on May 12, 2012, I expect that mine will be gone.

(Last parenthetical: Tomorrow, I have the distinct sense that my posting opportunities will be limited, as I am not sure I will be able to put words together while speaking them, much less writing them. Michael_D is predicting that I will be catatonic by tomorrow night, but I think I will enter that state long before then. I know that my ability to do anything actually resembling work today is already severely limited, so tomorrow if anyone wants to talk to me, they'll probably have to just pass me a note containing only yes or no questions.)

So let the final countdown begin...