Share All sharing options for: 10 days to go before Dynamo come home

I don't know about you, but it's been so long since I last actually attended a Houston Dynamo game that I am beginning to think I might never see them again. Today marks 10 days until the first game at BBVA Compass Stadium, and what a long trip it's been.

Despite yesterday's ribbon-cutting and last night's unbelievably cool laser light show party that Statoil hosted in the place (For more pics of both, check out the previous post. They're impressive.), I think we can all agree that until the Dynamo kick a ball in anger against DC United, the stadium will not be well and truly consecrated. And after this past weekend's rather uneven display at the crumbling hulk that is RFK Stadium, I think that "kicking a ball" and "anger" is a pairing we're likely to see on May 12.

This is far and away the longest interval between home matches since the team arrived in 2006 (Otherwise known as The Year of the Oranges). The last game was of course a 1-0 win over the Philadelphia Union, which are still coached, inexplicably, by Piotr Nowak. The game happened on Nov. 3, 2011, exactly six months ago tomorrow. I am trying to wrack my brain because it has been so long since that happened. I think we were the team in Orange, the house was packed and some Hawaiian guy stuck a dagger into some Philly hearts. Hmmm, what did that look like again? 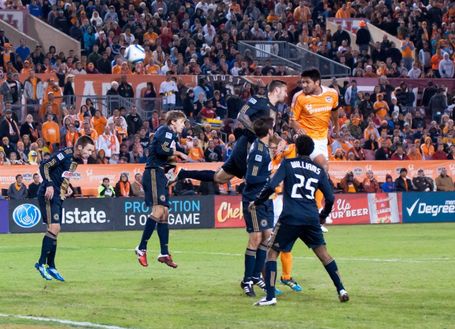 Oh yeah!! Now I remember. (Eagle-eyed observers can check out Playtherapy, Michael_D and myself standing in the stands there about to go hoarse at the Dynamo's last goal ever at the Rob.) (And one more parenthetical, the attendance that night was listed at 24,749, which is 2,749 greater than the capacity at the new crib. Just sayin.)

Since that day, our little Orange local squad is seriously growing up to take advantage of the new digs. As DT Overlord Woosley pointed out in a post up at SBNation.com (link here), the season-ticket base in the 22,000-seater has grown to over 12,000. Try to sink you teeth into that one for a second. The Dynamo are the only Houston pro sports franchise to show an increase in average attendance every year since 2007. The only one. Here are the actual numbers:

There is no doubt in my mind that the 2006 record is about to get smashed, and I would not be surprised at all if the average did not top 20,000, a very realistic goal seeing as how two games in May, the opener and the May 26 game against the Gag-me-axy, are both sell-outs. The 10 top attendances in team history are all over capacity for the new place, which is only going to drive demand as sell-outs are good news, and that carries with it a sort of marketing momentum, or so marketing-type humans tell me. We have indeed come a long way since Brian Ching scored the first goal at Robertson, as well as the last one in that pic up above.

But instead of looking at how things have changed from Nov. 3 to now, I prefer to continue with a little longer look back. On Sunday, Jan. 13, 2008, just over four years ago, I took the following photo: 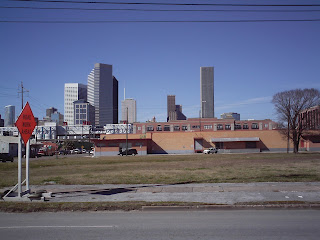 I was standing just at the corner of Walker and Dowling, looking west towards Downtown. Here are a few others I took from that same vantage point: 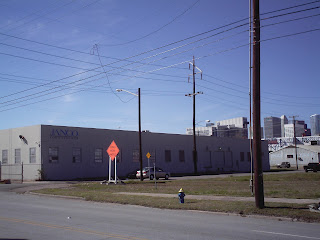 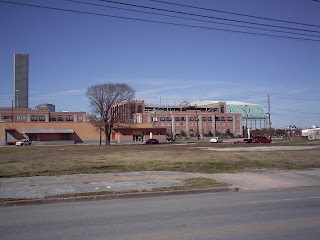 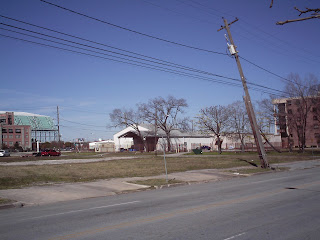 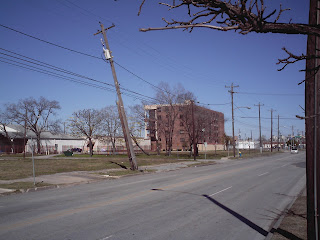 Wow, what a dilapidated neighborhood just east of downtown Houston. What a sad statement of urban blight. Just a mile or so from where my father grew up in the 1920s and 30s. It's just a crying shame. Surely someone, somewhere can come and rehabilitate this area. Time to pick up the Batphone and get this dealt with.

Hmmm, why is the Batphone orange?

Of course, that was over four years ago. These things take time, political muscle, some attention to detail. I wonder what that neighborhood looks like now. Think I'll see if anyone has taken a photo over there anytime recently. Well, what do you know! The Houston Dynamo posted a photo from almost that exact same vantage point, the very spot in which I stood in January of 2008. Here's what it looks like now: 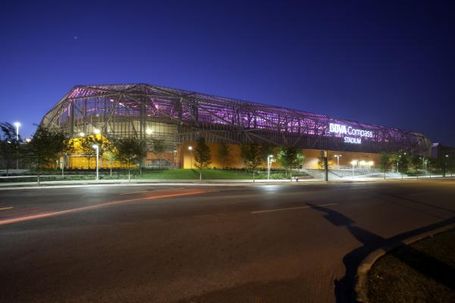